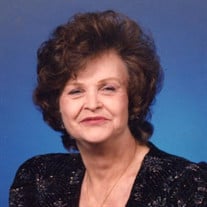 Patricia Ann Frazee, age 84, of Marion, IL, former 35 year resident of Rosiclare, IL, passed away peacefully with her family by her side, at 8:25 p.m. on Tuesday, October 22, 2019, in Heartland Regional Medical Center of Marion. She was born on Saturday, March 30, 1935, in Albion, NE, the daughter of Anthony R. and Alice Marie (Hyland) Fees. Patricia was united in marriage to Clarence C. Frazee, Jr. on Friday, March 22, 1957, in Jacksonville, FL and together they have shared over 62 years of marriage. She was of a devout Catholic and attended at St. Joseph Catholic Church in Elizabethtown prior to relocating to Marion, IL. Patricia was very talented artistically. She was an accomplished singer, entertained with different musical groups throughout the years and performed at local festivals, churches and nursing homes. She was actively involved at St. Joseph Catholic Church in Elizabethtown. She sang in the choir and taught Sunday school, but she was also an ordained Evangelical minister of the Catholic faith, read scripture at the local nursing home and administered Eucharist. She was also a frequent volunteer at the Women’s Shelter in both Elizabethtown and Harrisburg, IL., and once created a nonprofit organization called Help the Poor, Inc. to assist families in need with clothing. When she found moments to herself, she enjoyed oil painting, crocheting, knitting, quilting and crafting. Patricia loved spending time with her family and many friends. She always enjoyed the times they shared together and will be missed by all who knew and loved her. She is survived by her husband, Clarence C. Frazee, Jr. of Marion; two daughters, Angela Kay Thomas and her significant other, Kha Huynh of St. Louis, MO and Gina Marie Tyson and her significant other, Larry Rorer of Herrin, IL; two sons, Clarence Clint Frazee, III and his significant other, Jeff Remaley of Kansas City, MO and Daniel Lee Frazee and his wife Kimberly Frazee of Carbondale, IL; six grandchildren and six great-grandchildren, other extended family members and many friends. She was preceded in death by her parents, three brothers, Gene, Kenneth and Jerome Fees and one sister, Kay Joyce. Arrangements were entrusted to Wilson-McReynolds Funeral Home, 900 North Court Street, Marion, IL. Prior to the beginning of the public visitation Father Brian Barker conducted a Prayer Service with the family. The visitation was from 5:00 p.m. until 7:00 p.m. on Friday, October 25th, at the funeral home. During the time of visitation a “Reflection of Life” DVD Memorial Tribute featuring special people, places and events in Patricia’s life was presented to the family and friends. The visitation resumed at 10:00 a.m. Saturday, October 26, 2019, at St. Joseph Catholic Church, 600 North Russell Street in Marion with the Funeral Mass following at 11:00 a.m. with Father Brian Barker presiding. Others participating in the service were Sheila Dingrando as Lector, Patricia Heckel as Cantor, Melissa Bound as Pianist, Dan Fruge as Sacristan, Hayden Lees, Joe Marlo and Dan Fruge as Alter Servers and Tony Young, Dick Heckel and Cindy Young as Eucharistic Ministers. Also during the service, Father Brian Barker presented the special vocal musical selection “All Roads” accompanying himself on the piano. Special musical selections presented during the Mass were “Amazing Grace”, “Shepherd Me O God”, Like a Childs Rests”, “Here I Am Lord”, “Ave Maria”, “Song of Farewell” and “”Just a Closer Walk With Thee” with Melissa Bound accompanying all on the piano. Interment followed at San Carlo Catholic Cemetery in Herrin, IL. Pallbearers were Daniel Frazee, Clint Frazee, Jacob Thomas, Shawn Thomas, Jeff Remaley and Kha Huynh. Following the committal service at the cemetery the family and friends gather back at the Family Life Center of the church for a meal and continued time of fellowship and support. For those who preferred, memorial contributions were made to “American Cancer Society” and/or “The Alzheimer’s Association” and mailed in care of Wilson-McReynolds Funeral Home, 900 N. Court St., Marion, IL 62959. Memorial envelopes were available at the funeral home and the church. For additional information please call the funeral home at 618-993-2131.

Patricia Ann Frazee, age 84, of Marion, IL, former 35 year resident of Rosiclare, IL, passed away peacefully with her family by her side, at 8:25 p.m. on Tuesday, October 22, 2019, in Heartland Regional Medical Center of Marion. She was born... View Obituary & Service Information

The family of Patricia Ann Frazee created this Life Tributes page to make it easy to share your memories.

Send flowers to the Frazee family.