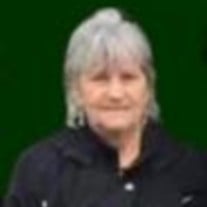 Patricia Kay King, age 79, of Marion, IL, passed away peacefully at 2:40 p.m. on Wednesday, October 6, 2021, at home with her family by her side. She was born on Friday, August 21, 1942, in Marion, IL the daughter of Riley Baynard and Mary Ruth (James) Proctor. She attended school in Marion, and was a graduate of Marion High School Class of 1960. Pat loved her Lord and was of the Protestant faith. She was united in marriage to Jerry Dale King on March 5, 1959, in Marion, IL and together they have shared over 62 years of marriage. Pat was a devoted wife and mother and dedicated her life to the care of her family and her home. She is survived by her husband, Jerry King of Marion; two sons, Darryl Ray and Yvette King of Crab Orchard, IL and Rodney Dale and Cindy King of Marion; five grandchildren, Heather and Branden Travelstead of Goreville, IL, Kody King of Metropolis, IL, Dallas and Hannah King of Herrin, IL, Kolton and (Katie) King of Galatia, IL, Cheyenne King and fiancé Nathan Sullivan of Pittsburg, IL; four great grandchildren, Risten, Tyler, Phoenix and Ben; sister and brother-in-law, Elaine and J. D. Motsinger of Crab Orchard, IL and brother, Jim Proctor of Murphysboro, IL. She was preceded in death by her parents and three sisters, Janette Proctor, Nancy Keyser and Merna Lee Dennis. Arrangements have been entrusted to Wilson-McReynolds Funeral Home, 900 North Court Street, Marion, IL. Per her request there will no services at this time. The family has requested for those who prefer, memorial contributions may be made to "Residential Hospice & Health Care". Memorial contributions may be mailed in care of Wilson-McReynolds Funeral Home, 900 N. Court Street, Marion, IL, 62959. For additional information call the funeral home at 618-993-2131.

The family of Patricia Kay "Pat" King created this Life Tributes page to make it easy to share your memories.