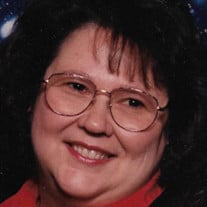 Patricia Diana “Pat” (Lancaster) Morris, age 69, of Marion, IL, formerly of St. Louis, MO, passed away peacefully surrounded by her loving family at 5:40 p.m. on Thursday, February 28, 2019, after a long illness, in Integrity Health Care of Marion. She was born on Wednesday, March 23, 1949, in St. Louis, MO the daughter of John Robert and Nadine Angeline (Hayes) Lancaster. Pat attended school in St. Louis and was a graduate of Roosevelt High School Class of 1968. Pat was united in marriage to Lyman Wayne Morris on Saturday, September 11, 1971, at Southside General Baptist Church of Lemay, MO and together they have shared over 47 years of marriage and he survives. This union was blessed with 3 children: Diana, Jeremy and Rachel. Pat was a homemaker and worked part-time holding various positions for the last 10 years of her working career as a Substitute Teacher Assistant for Special Needs for the Franklin-Williamson Special Education District in Marion. She assisted with the age groups from Pre-K to 12th grade. She was a member of Third Baptist Church of Marion. Pat was active in the church serving as Sunday school teacher to Women’s Group Leader until the birth of her youngest child Rachel, which made continuing difficult. Pat, along with her husband, worked tirelessly to provide as “normal” a life for their special needs (Cerebral Palsy) daughter Rachel, while also working just as hard for the other two children. She was a loving wife, mother and friend. The many memories that have been were created, will now be cherished by all who knew and loved her. She is survived by her husband, Lyman Morris of Marion; daughter and son-in-law, Diana and Robert Burgess of Marion; son and daughter-in-law, Jeremy and Lindsey Morris of College Station, TX; two granddaughters, Malina Morris and Keilana Morris both of College Station; two grandsons, Preston Burgess of Marion and Ethan Morris of College Station; sister and brother-in-law, Karen and Richard “Rich” Johnson of Houston, TX; brother and sister-in-law, Robert & Terry Lancaster of Wildwood, MO, several nieces, nephews, grand-nieces and grand-nephews, other extended family members and many friends. Her parents and daughter Rachel, a special needs child who passed away on August 25, 2018 preceded her in death. Arrangements for Patricia Diana “Pat” Morris were entrusted to Wilson-McReynolds Funeral Home, 900 N. Court St., Marion. The visitation was from 4:00 p.m. until 7:00 p.m. on Tuesday, March 5, 2019, at the funeral home. During the time of visitation a “Reflection of Life” DVD Memorial Tribute featuring special people, places and events in Pat’s life was presented to the family and friends. Following the time of visitation the funeral service was at 7:00 p.m. with Pastor David Thompson presiding. The prelude and postlude musical selections were recorded piano selections. Special recorded vocal musical selections presented during the service were; “Look for Me” by Tanya Goodman Sykes, “See You There” by Joey Feek and “I Want to Stroll Across Heaven With You” by Alan Jackson. Other vocal musical selections presented during the service were; “Make Me a Blessing” by John Johnson and “Surly Goodness and Mercy” as a congregational hymn with pianist Laura Thomas accompanying on both. The committal service and interment took place at 1:00 p.m. on Wednesday, March 6, 2019, in Mt. Pisgah Baptist Church Cemetery located north of Silva, MO. For those who preferred memorial contributions were made to “Hospice of Southern Illinois” and mailed in care of Wilson-McReynolds Funeral Home, 900 N. Court Street, Marion, IL 62959. Memorial envelopes were available at the funeral home. For more information call the funeral home at 618-993-2131.

The family of Patricia "Pat" Diana Morris created this Life Tributes page to make it easy to share your memories.

Send flowers to the Morris family.