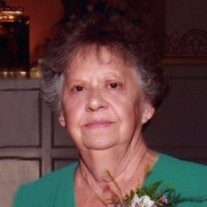 Patsy L. Dalton, age 75, of Creal Springs, IL, passed away peacefully at 4:55 a.m., Wednesday, October 9, 2013, at her home. Patsy was born on Thursday, May 26, 1938, at home south of Marion, the daughter of William A. and Alma M. (Marks) Bratten. She was united in marriage to Paul E. Dalton on Friday, March 15, 1957, in Marion, IL and together they shared over thirty-eight years of marriage. He passed away on Monday, January 22, 1996. Patsy was of the Baptist faith. For many years before her retirement, she was an employee of Norge in Herrin, IL and was a former member of the International Association of Machinist and Aerospace Workers Union of Herrin, IL. She loved to read mystery novels and her favorite author was James Paterson. She enjoyed working in her garden and especially enjoyed growing roses. She was a loving and caring wife and mother and was a great cook, and loved preparing delicious meals for her family. She liked to keep busy caring for her home and family and especially enjoyed spending time with her grandchildren and great-grandchildren. Survivors include her four daughters and two sons-in-law, Pamela Brewer and her husband, Tim of Goreville, IL, Sandra Dalton Haas and Lou Dalton both of Creal Springs, IL and Paulette K. Woodcock and her husband, Butch of West Frankfort, IL; son, Stephen P. Dalton of Creal Springs, IL; ten grandchildren, Joshua Brewer, Jeremy Brewer, Stacy Haase, Paul Haase, Jr., Dustin Newbold, Nash Newbold, Paige Newbold, Jacob Edwards, Shannon Kutz and Deivanne Dalton, five great grandchildren; brother, William Bratten of Creal Springs, IL, several nieces and nephews, other extended family members and many friends. She was preceded in death by her parents, husband; four sisters, Grace White, Eva Brown, Dorothy Troxel and Freda Marks and brother, Donald Bratten. Arrangements for Patsy L. Dalton were entrusted to Wilson-McReynolds Funeral Home, 900 N. Court St., Marion, IL. The visitation for the family and friends was from 11:00 a.m. to 1:00 p.m. on Friday October 11, 2013, at the funeral home. During the time of visitation a “Reflection of Life” DVD Memorial Tribute featuring special people, places and events of Patsy’s life was presented to the family and friends. Following the time of visitation the funeral service was at 1:00 p.m. with Rev. Kevin McNeely presiding. The prelude and postlude musical selections were recorded selections. Special recorded vocal musical selections presented during the service were “The Old Rugged Cross”, “How Great Thou Art” & “Amazing Grace”. Interment followed in McKinney Chapel Cemetery of the Lake of Egypt area near Goreville, IL. Pallbearers were Joshua Brewer, Jeremy Brewer, Paul Haase, Jr., Dustin Newbold, Nash Newbold and Jacob Edwards. After the committal service the family and friends gathered back at Patsy’s home for a meal and continued time of fellowship and support. For additional information please call the funeral home at 618-993-2131.

The family of Patsy L. Dalton created this Life Tributes page to make it easy to share your memories.

Send flowers to the Dalton family.