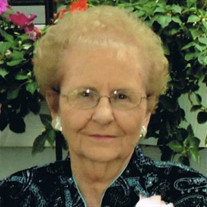 Patsy Ruth (Webb) Atwood, age 84, of Marion, IL, took God’s hand peacefully at home with her family by her side at 3:55 p.m. on Thursday, January 16, 2020. She was born on Sunday September 1st, 1935 to William Barton and Janette Edmonds Webb. She was one of thirteen children born to this union at the Old Homeplace she wrote about in her book, Memories of Pathways. She grew up in her humble country home that was filled with hard-working, loving family members during the Great Depression. Out of this close-knit family came many stories that she was able to recall and share with her family and friends. Patsy and her brothers and sisters enjoyed all the adventures they encountered growing up on the old farm near what is now near Dutchman Lake road in the Tunnel Hill area. Growing up on a remote 80-acre farm, they enjoyed things like their playhouses and picnics under the old shade tree. Another area was the “Little Rock” where they enjoyed playing and other trips to the “Buzzard’s Roost” and the nearby waterfall. Her sisters and Mother were able to make routine chores into fun times such as every Monday was a trip to the spring to do the week’s laundry. The family loaded the wagon with washtubs, a kettle and a mountain of dirty clothes. Patsy would recall how she could remember seeing all of the clean clothes hanging in the trees with the fragrance of honeysuckle in the air. After Patsy graduated Vienna High School in 1953, the family moved to Marion and she started attending Scottsboro Baptist church where she became closely acquainted with her handsome Sunday School teacher and future husband William Dale Atwood. They were married on June 12th 1954 and together shared more than 65 years of marriage with no arguments. They lived in the same house in Scottsboro their entire marriage. For most of her life Patsy was a homemaker and always loved taking care of her family. For a while she worked for General Telephone Company and then in Tempo in the fabric department. Patsy will always be remembered for her loving and caring personality. She loved God and her entire family more than anything else. She remained humble and thankful her entire life for the simple things most people now take for granted. She is survived by her husband, William Dale Atwood; daughter, Becky Jack of Marion; two sons, Gordon D and JoEllen Atwood of Marion, IL and Charles W and Paula Atwood of Mascoutah, IL; six grandchildren, Rachel and husband Ken Dawkins of Marion, IL, Renee and husband Ryan Strunk of Carterville, IL, Ranie and husband Doug Verby of St. Louis, MO, Ellie and husband Jon Perez of Sunnyside Queens, NY, Joseph Atwood of Pleasanton, CA, Caleb Atwood of Mascoutah, IL, six great Grandchildren, Gene and Katelyn Covey of Marion, IL, Jackson and Lily Strunk of Carterville, IL, River and Reagan Verby both of St. Louis, MO; sister, Alice Mae Blue of Marion, brother in law, L.D. Bowers of Puxico, MO; a host of nieces and nephews and other extended family and many friends. She was preceded by her parents, son-in-law Richard Jack, brothers, Woodrow and wife Jean, James and wife Doris, Leaman Webb, Earl and wife Maude, Walter Webb who passed away at 18 months and 4 infant still born brothers, Barton Eugene, Ward, Donald and Ronald Webb, Sisters Clara June Bowers and Betty Lou Breedlove and her husband Oscar, brother in law, Ralph Blue, and nephew Victor Webb. Arrangements have been entrusted to Wilson-McReynolds Funeral Home, 900 N. Court St., Marion. The visitation will be from 1:00 p.m. until 5:00 p.m. on Sunday, January 19, 2020, at the funeral home. The funeral service will be at 11:00 a.m. on Monday, January 20, 2020 with Pastor Woody Webb and Pastor Mike Hood presiding. The graveside committal service will follow the next day at 11:00 a.m. in Rose Hill Cemetery in Marion, with Pastor Mike Hood presiding. Those wishing to attend the committal service should gather at the cemetery prior to 11:00 a.m. For those who prefer, memorial contributions may be made to the “Scottsboro Baptist Church Building Fund” and or the “Simpson Cemetery” and mailed in care of Wilson-McReynolds Funeral Home, 900 N. Court Street, Marion, IL 62959. Memorial envelopes will be available at the church and funeral home. For additional information, call the funeral home at 618-993-2131.

The family of Patsy Ruth (Webb) Atwood created this Life Tributes page to make it easy to share your memories.