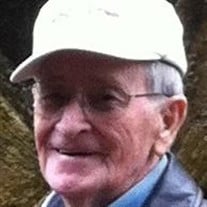 Paul L. Sprague, age 81, of Marion, IL, went home to Jesus after a lengthy pulmonary illness, at 9:27 p.m. on Sunday, January 18, 2015, in Memorial Hospital of Carbondale, IL. He was born south of Marion, IL on Friday, June 16, 1933, the son of Floyd A. and Beatrice (Hester) Sprague. Paul answered the call of this nation by serving in the United States Army during the time of the Korean War and was stationed in Germany. After his period of faithful service he was honorably discharged with the rank of corporal. He returned home and moved to Chicago, IL to begin his working career. He soon returned to Marion and began working with the Marion School System as a painter. He later decided to begin his own painting business, Sprague Painting and Decorating, specializing in commercial painting and some residential. After a career of over fifty years, he retired in 1998. Paul was united in marriage to Carole Sue Phillips on Thanksgiving Day, November 22, 1956, in the Spillertown Baptist Church of Spillertown, IL and together they have enjoyed over fifty-eight years of marriage. He attended Rivers of Living Water Fellowship Church of DeSoto, IL. He also was a member of the International Union of Painters and Allied Trades and was a lifetime member of the Heyde-Pillow V.F.W. Post No. 1301 of Marion, IL. In his spare time he enjoyed hunting and fishing with his family and friends. He especially enjoyed competing with his son-in-law in bass fishing competitions. Paul enjoyed spending time taking care of his home and yard and was an avid St. Louis Cardinal fan. He loved traveling with his family, especially when it included trips with his grandchildren. Paul was a strong family man and was devoted to his family; his girls couldn’t have imagined a better Dad on this earth. His family was truly blessed and the many memories that have been created will now be cherished by those left behind. He is survived by his wife, Carole S. Sprague of Marion, IL; two daughters, Tonja Sprague of Marion, IL and Kimberly Knight of Edmond, OK; granddaughter, Stephanie Dunning and husband, Evan of Oklahoma City, OK; grandson, Ryan Knight and his girlfriend Cynthia Sun of Santa Clara, CA; two sisters and brothers-in-law, Joanne and Bill Olsen of Marion, IL and Jeanetta and Paul Sexton of Baldwin Park, CA; brother-in-law, David Phillips and his wife, Mae Lee of Marion, IL; five sisters-in-law, Peggy Gisy and her husband, Gordon, Maxine Sprague, Lucy Sprague and Peggy Sprague Robinson and her husband, Paul all of Marion, IL and Mildred Haseker of Carbondale, IL, many nieces and nephews whom he loved very much, other extended family and many friends. He was preceded in death by his parents; four brothers, J.D., Don, Richard and Tom; three sisters, Betty Lantrip, Helen West and Hazel Faught; son-in-law, Thomas J. Knight and many cousins, aunts and uncles. Arrangements for Paul L. Sprague were entrusted to Wilson-McReynolds Funeral Home, 900 N. Court St., Marion, IL. The time of the visitation for family and friends was from 5:00 p.m. to 8:00 p.m. on Thursday, January 22nd at the funeral home. During the time of visitation a “Reflection of Life” DVD Memorial Tribute featuring special people, places and events in Paul’s life was presented to the family and friends. The funeral service was at 1:00 p.m. on Friday, January 23, 2015, at Wilson-McReynolds Funeral Home with Rev. Susan Burnett presiding. During the service there was a time for comments of memory, with many of those attending sharing their special memories about Paul. The prelude and postlude musical selections were recorded piano selections. Special recorded vocal musical selection presented during the service were; “How Great Thou Art” by Susan Boyle, “The Old Rugged Cross” by Alan Jackson and “Amazing Grace” by The Mormon Tabernacle Choir. As the casket was taken out of the funeral home the recorded vocal musical selection “Oh Happy Day” by Susan Boyle was presented. Interment followed in Rose Hill Cemetery of Marion, IL. Pallbearers were David Phillips, Bill Olsen, Larry Olsen, Scott Sprague, Ryan Knight and Evan Dunning. Military honors were accorded at the graveside by members of Heyde-Pillow V.F.W. Post No. 1301, American Legion Post No. 147 both of Marion, IL and the Illinois Army National Guard Funeral Honors Burial Detail. Those V.F.W. members participating were Commander, Larry Largent; Chaplain, Nancy Brown; Officer of the Day, Ernie Rinella; Bugler, Jim Grieme; Honor Guard, George Trammel; Color Guard, Bill Reynolds and Bill Rice; National Colors, Jeff Hoffard; V.F.W. Post Colors, Wayne O’Connor; American Legion Colors, Ron Ganzer; POW/MIA Colors, Jerry Swisher and Firing Squad, Don Burgrabe, Gene Broombaugh, Bob Casey, Bill Hampsey, Bill Hatfield, Fred Read and Ron Russell. Members of the Illinois Army National Guard Funeral Honors Burial Detail participating in the folding of the flag were SPC William Ott and SPC Justin Sheffler. During the folding of the flag the musical selection “America the Beautiful” was presented. Presentation of the folded flag to Paul’s wife, Carole was by SPC Justin Sheffler. After the committal service at the cemetery many members of the family gathered at Bennie’s Italian Restaurant of Marion for a meal and continued time of fellowship and support. For those who preferred, memorial contributions were made to “Rivers of Living Water Fellowship Church Building Fund” and mailed in care of Wilson-McReynolds Funeral Home, P.O. Box 370, Marion, IL 62959. Memorial envelopes were available at the funeral home. For additional information please contact the funeral home by calling 618-993-2131.

The family of Paul Laverne Sprague created this Life Tributes page to make it easy to share your memories.

Send flowers to the Sprague family.