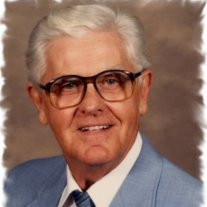 Paul L. Walker, age 98, of Marion, IL passed away peacefully at 9:45 p.m. on Friday, October 4, 2013, at home with his family by his side. Paul was born March 14, 1915, in Johnston City, IL the son of Francis Marion Walker and Nora Belle (Hogue) Walker. He was united in marriage to Marian Louise Laubscher on December 20, 1941, in Johnston City, IL and together they shared over sixty seven years of marriage until her death, July 14, 2009. Paul grew up in Johnston City, IL and was a graduate of the Johnston City High School. Following Paul's military service in WWII, Paul and his brother, Vance Walker, acquired the family business, “Walker Wholesale" of Marion and Paul and Marian worked in the business until their retirement in 1999. He was a member of the Illinois Association of Tobacco and Candy Distributors. He was a faithful and active member of the First Baptist Church of Marion, IL where he enjoyed the fellowship of his church family and for a while he was a Sunday school teacher. He was a faithful and active member of the First Baptist Church of Marion, IL where he enjoyed the fellowship of his church family. Paul loved to golf and was a former member of the Kokopelli Golf Club and the Crab Orchard Golf Club where he proudly shot his age at age 72. In his spare time he enjoyed landscape oil painting, spending time with his cat and companion, Lincoln, and many family gatherings. He will be remembered for his integrity and willingness to help his family and others. He had a keen sense of humor and a quick wit. His memory will be cherished by all who knew and loved him. He is survived by his two daughters and one son-in-law, Jan and Dr. Robert Hayner of Hilton Head Island, SC, and Judy Doughty of Champaign, IL; son Roger Walker of Herrin, IL; five grandchildren, Jennifer Pallante of Marion, IL, Susan Seidel and her husband, Christian, of San Diego, CA, Kyle Doughty and his wife, Heather, of Champaign, IL, Katie Schroeder and husband Lee and Kasey Walker all of Herrin, IL; six great grandchildren, Ashley Pallante, A.J. Pallante, Anna Pallante, Ella Seidel, Holly Seidel and Kaydin Schroeder; other extended family and many friends. The family would like to thank Dr. Jack Keller and caregiver, Mary Ann Vaughn for their continued loving care and concern. He was preceded in death by his parents, wife, three sisters: Stella Newton, Ina Dodt and Violet Harriss, and four brothers: Dan, Clyde, Vance and Floyd Walker. The arrangements for Paul L. Walker were entrusted to the Wilson-McReynolds Funeral Home, 900 N. Court Street, of Marion, IL. The visitation for the family and friends was from 11:00 a.m. until 1:00 p.m. Monday, October 7, 2013 at the funeral home. Following the time of visitation the funeral service was at 1:00 p.m. with Dr. Jerry Ford presiding. The prelude and postlude musical selections were presented by pianist, Byron Corzine. Special musical selections presented during the service were “His Eye Is On The Sparrow” by Brian Summers, accompanied by pianist, Byron Corzine and “Amazing Grace”, as a congregational hymn, lead by Brian Summers and accompanied by pianist, Byron Corzine. Interment followed in the Rose Hill Cemetery in Marion, IL. Pallbearers were Ralph Walker, Kyle Doughty, A.J. Pallante, Nick Johnston, Lee Schroeder and Delman Mayhew. Military honors were accorded at the graveside by members of Heyde-Pillow V.F.W. Post No. 1301, American Legion Post No. 147 and Illinois National Guard Flag Detail all of Marion, IL. For those who preferred memorial contributions were made to “Hospice of Southern Illinois” or “First Baptist Church Building Fund”. Memorial contribution envelopes were available at the funeral home or may be mailed in care of Wilson-McReynolds Funeral Home, P.O. Box 370, Marion, IL 62959. For additional information or to leave an online condolence or memory, please visit our website at www.wilsonmcreynolds.com or call 618-993-2131. For additional information please call the funeral home at 618-993-2131.

The family of Paul L. Walker created this Life Tributes page to make it easy to share your memories.

Send flowers to the Walker family.