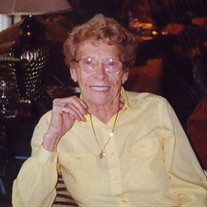 Pauline Howerton, age 94, of Marion, IL passed away suddenly at 8:33 a.m. in Marion, IL, on Monday, May 5, 2014. Pauline was born on Tuesday, October 7, 1919, in Pittsburg, IL, the daughter of Irvin M. and Ruby Mae (Owens) Edwards. She was a member of (Member since April 13, 1952) LeRoy A. Chapter, No. 350. Order of Eastern Star of Marion, IL and International Brotherhood of Teamsters Local No. 1268 of Belvidere, IL. Her working career was as an over the road truck driver for many years. The many special times spent with her family and many friends will now be cherished by those she leaves behind. She is survived by grandson, Brett A. Edwards of LaGrange Park, IL, other extended family members and many friends. Preceding her in death were her parents; foster son, Dennis Eugene Edwards, I; granddaughter, Jamie Jo Edwards in 2008; grandson, Dennis Eugene Edwards, II in 2008; brother, Irvin McKinley Edwards, Jr.; aunt, Lena Sims and uncle, Hobart Edwards. Arrangements for Pauline Howerton will be entrusted to Wilson-McReynolds Funeral Home, 900 N. Court St., Marion, IL. In accordance with her wishes no public service will be conducted. For those who prefer, memorial contributions may be made to “American Heart Association” and mailed in care of Wilson-McReynolds Funeral Home, P.O. Box 370, Marion, IL 62959. Memorial envelopes will be available at the funeral home. For additional information please contact the funeral home by calling 618-993-2131.

The family of Pauline Howerton created this Life Tributes page to make it easy to share your memories.

Send flowers to the Howerton family.