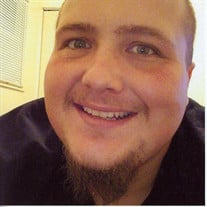 Peter Alan “Petey” Schneider, Jr., age 25, of Galatia, IL passed away suddenly at 5:10 p.m. on Sunday, May 6, 2018 in the Heartland Regional Medical Center Emergency Room of Marion, IL. He was born on Friday, November 6, 1992 in St. Petersburg, FL, the son of Peter Alan and Dorothea Irene “Dottye” (Trump) Schneider, Sr. He attended school at Crab Orchard, IL. Petey was currently working as a mechanic for Raben Tire in Marion. He had previously worked for NAPA, delivering parts and also had worked as a coal miner. He was an outdoorsman. He enjoyed all kinds of hunting, fishing, gardening, and canning. He was known for his beard and loved maintaining it. He was also an avid Ford supporter, always having a loud truck. Petey loved his family and friends and looked forward to the times they would be together. The many memories that were created will now be cherished by those he leaves behind. He is survived by his mother and step-father, Dottye and Joe Hamrick of Vass, NC; father and step-mother, Peter A. and Rhonda Schneider, Sr. of Pinckneyville, IL ; sister and brother-in-law, Caitlin and Sonny Perry of Fort Bragg, NC; brother and his fiancée, Tim R. Schneider and Rachel Medina of West Frankfort, IL; two uncles, James Harris and his husband, Chandler Schain-Harris of Pleasant Hope, MO and Rick Trump of Lakeland, FL; aunt, Beth Trump-Cornell of Bolivar, MO; paternal grandfather, William A. Schneider of Palm Harbor, FL; paternal grandmother and step-grandfather, Linda and Robert Bain of Palm Harbor, FL; step-paternal grandmother, Donna Moore of Pinckneyville, IL; two nieces, Macey Schneider of West Frankfort, IL and Adelynn Perry of Fort Bragg, NC; nephew, Rickardo Schneider of West Frankfort, IL; close friends, Zach Colson of Galatia, IL and Ty Bailey of Crab Orchard, IL, other extended family, and many friends. He was preceded in death by his sister, Keira Dawn Hamrick. Arrangements for Peter Alan “Petey” Schneider were entrusted to Wilson-McReynolds Funeral Home, 900 N. Court St., Marion. The visitation was Thursday, May 10, 2018, from 10:00 a.m. until 1:30 p.m. at the funeral home. During the visitation a “Reflection of Life” DVD Memorial Tribute was presenting to the family and friends and featured special people, places, and events of Petey’s life. Following the time of visitation the funeral service was at 1:30 p.m. with Rev. Matt Troxel presiding. The prelude and postlude musical selections were recorded piano selections. Special recorded vocal musical selections presented during the service were “Times We Had” by Taylor Ray Holbrook featuring Colt Ford and Charlie Farley, “Swing Life Away” by Rise Against, and “You Should Be Here” by Cole Swindle. Special comments of memory were presented by various family and friends during an informal time of sharing. Interment followed in Cana Cemetery of Goreville, IL. Those serving as pallbearers were Timmy Schneider, Joe Hamrick, Caitlin Perry, Zach Colson, Ty Bailey, Tyler Purnell, Dakota Little, Dalton Troehler, and in spirit, Tyler Rath. Following the graveside committal service at the cemetery, family and friends gathered at Ray Fosse Park for a meal and continued time of fellowship and support. For those who preferred memorial contributions were made to “Wilson-McReynolds Funeral Home” to help with final expenses and mailed in care of the funeral home, 900 N. Court Street, Marion, IL 62959. Memorial envelopes were available at the funeral home. For additional information call the funeral home at 618-993-2131.

The family of Peter Alan "Petey" Schneider Jr. created this Life Tributes page to make it easy to share your memories.

Send flowers to the Schneider family.