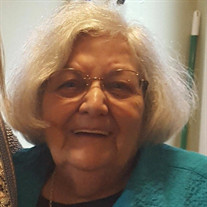 Phyllis Ann (Whitlock) Wohlwend, age 78, of Creal Springs, IL, passed away peacefully at 10:06 a.m. on Saturday, March 16, 2019, at her home. She was born at home on Wednesday, June 5, 1940, in Marion, the daughter of William Virgil and Marguerite (Fambrough) Whitlock. Phyllis attended school in Marion and was a graduate of Marion High School Class of 1958. She recently had attended a class reunion and always tried to keep in touch with her fellow classmates. She was first united in marriage to Robert Eugene Spell and to this union 3 children were born; Virgil, Mary and Phyllis. She later was united in marriage to Carl Edgar Wohlwend on Thursday, October 24, 1985, in Creal Springs and together they shared over 31 years of marriage until his death on Tuesday, January 3, 2017. She began her working career while living in St. Louis, MO for a carpet company as their Keypunch Operator. In 1980 she moved back to southern Illinois near Carrier Mills and later in 1982 to Creal Springs. She then worked for Booth Transfer Moving Company in Marion as their Bookkeeper and later worked for Raben Tire of Marion as their Clerical Secretary and Bookkeeper for many years until her retirement. Phyllis was a faithful member of Fairview Baptist Church of Creal Springs. In her spare time she enjoyed sewing, quilting, collecting dolls and NASCAR and Coca-Cola memorabilia. She also enjoyed going to car shows with her husband Carl. They also enjoyed traveling to many states visiting with their extended friends. Phyllis enjoyed spending time with her friends and family. She was always interested in all of their many activities. The many memories that have been created will now be cherished by those she leaves behind. She is survived by her son, Virgil E. Spell of Creal Springs; two daughters and one son-in-law, Mary Lynn and Casey Odum of Creal Springs and Phyllis Ann Spell of Marion, nine grandchildren, seven great grandchildren; step-son, Marc Wohlwend and step-daughter, Christine Bryant both of Belleville, AR; sister-in-law, Ruth Ann Kolb of Vienna, IL, other extended family and many friends. She was preceded in death by her parents, both husbands; step-son, Carl Anthony “Tony” Wohlwend and step-grandson, Marc Wohlwend, Jr. Arrangements were entrusted to Wilson-McReynolds Funeral Home, 900 N. Court St., Marion. The visitation was from 4:00 p.m. until 7:00 p.m. on Tuesday, March 19th, at the funeral home. The funeral service was at 11:00 a.m. on Wednesday, March 20, 2019, at Wilson-McReynolds Funeral Home with Rev. Ken Sharp presiding. The prelude and postlude musical selections were recorded piano selections. Special recorded vocal selections presented during the service were; “One Day at a Time” by Cristy Lane and “Amazing Grace” by Elvis Presley. During the service a good friend of Phyllis, Rose Edwards presented “The Lord’s Prayer” as an acapella selection. The service concluded with the musical selection; “Go Rest High On That Mountain” by Rev. Ken Sharp with recorded accompaniment. Interment followed next to her husband in Maplewood Cemetery of Marion. Pallbearers were Casey Odum, Aaron Odum, Travis Odum, Phillip Russell, Derek Coontz and Brent Boner. Following the committal service at the cemetery the family and friends gathered at Fairview Baptist Church, located north of Creal Springs, for a meal and continued time of fellowship and support. For those who preferred, memorial contributions were made to “American Cancer Society” and mailed in care of Wilson-McReynolds Funeral Home, 900 N. Court Street, Marion, IL 62959. For additional information call the funeral home at 618-993-2131.

Phyllis Ann (Whitlock) Wohlwend, age 78, of Creal Springs, IL, passed away peacefully at 10:06 a.m. on Saturday, March 16, 2019, at her home. She was born at home on Wednesday, June 5, 1940, in Marion, the daughter of William Virgil and Marguerite... View Obituary & Service Information

The family of Phyllis Ann (Whitlock) Wohlwend created this Life Tributes page to make it easy to share your memories.