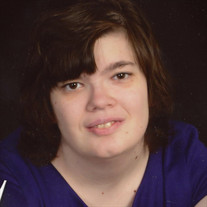 Rachel E. Morris, age 26, of Marion, IL, passed away peacefully surrounded by her loving family at 8:45 a.m. on Saturday, August 25, 2018, in Heartland Regional Medical Center of Marion. She was born on Monday, October 21, 1991, in Memorial Hospital of Carbondale, IL the daughter of Lyman Wayne and Patricia Diana (Lancaster) Morris. Rachel attended school in Marion and was a graduate of Marion High School Class of 2010. Rachel was born with Cerebral Palsy which led to developmental disabilities. Remarkably her brain rewired itself and she lived a “Normal Life” as much as possible. She was a happy child and exhibited unconditional love and was never judgmental, accepting all regardless of sex, age, color or their ability or disability. She was a member of Third Baptist Church of Marion. During the day she attended at Centerstone in West Frankfort, IL. She also would participate every year in the Special Olympics. In her spare time she enjoyed going to the movies, listening to music, dancing, shopping, going out to eat, and watching people. She enjoyed going to the Miner’s baseball games and was an avid St. Louis Cardinal fan. Rachel brought joy and would light up the room to all she met with her smile and was an example of “Pure Love”. She was a social butterfly and cared about other people’s needs and was known to many as “Little Mother Hen”. The many memories that have been created will now be cherished by all those she leaves behind. She is survived by her parents, Lyman and Pat Morris of Marion; sister and brother-in-law, Diana and Bob Burgess of Marion; brother and sister-in-law, Jeremy and Lindsey Morris of College Station, TX; two nephews, Preston Burgess of Marion and Ethan Morris of College Station; two nieces, Malina Morris and Keilana Morris both of College Station, countless extended family members and many friends. She was preceded in death by her grandparents. Arrangements for Rachel E. Morris were entrusted to Wilson-McReynolds Funeral Home, 900 N. Court St., Marion. The visitation was from 4:00 p.m. until 7:00 p.m. on Wednesday, August 29th, at the funeral home. During the visitation a “Reflection of Life” DVD Memorial Tribute was presented to the family and friends and featured special people, places, and events of Rachel’s life. Following the time of visitation the funeral service was at 7:00 p.m. with Pastor David Thompson presiding. The prelude and postlude musical selections were recorded piano selections. Special congregational hymns presented during the service were “Jesus Messiah” and “Amazing Grace, My Chains Are Gone” both lead by John Johnson. Special recorded vocal musical selections presented during the service were “Serenaded By Angels” by The Talleys and “Home” by Chris Tomlin. The committal service and interment took place at 1:00 p.m. on Thursday, August 30, 2018, in Mt. Pisgah Baptist Church Cemetery located north of Silva, MO. For those who preferred memorial contributions were made to “Centerstone” and mailed in care of Wilson-McReynolds Funeral Home, 900 N. Court Street, Marion, IL 62959. Memorial envelopes were available at the funeral home. For more information call the funeral home at 618-993-2131.

Rachel E. Morris, age 26, of Marion, IL, passed away peacefully surrounded by her loving family at 8:45 a.m. on Saturday, August 25, 2018, in Heartland Regional Medical Center of Marion. She was born on Monday, October 21, 1991, in Memorial... View Obituary & Service Information

The family of Rachel Elyse Morris created this Life Tributes page to make it easy to share your memories.

Send flowers to the Morris family.