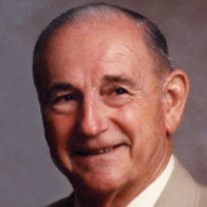 Raymond “Ray” Parks, Jr., age 96, of Noblesville, IN, formerly of Marion, IL, passed away peacefully at 1:05 a.m. (Eastern Time), on Tuesday, January 7, 2014, at Prairie Lakes Health Campus of Noblesville, IN. He was born on Thursday, November 1, 1917, in Williamson County, IL the son of Raymond and Cora (Fry) Parks. Ray attended school in Marion, IL and was a graduate of Marion High School. He was united in marriage to Hallie R. Mofield, on Saturday, November 12, 1938, in St. Louis, MO, and together shared sixty six years of marriage until her death on November 11, 2004, just one day before their anniversary. Early in his working career he worked for the Goodyear Tire Company and later for the Horton Sales Company of Cape Girardeau, MO as their regional salesman in Southern Illinois and parts of Kentucky and Missouri of automotive parts and tire sales until retiring in 1982. He was a member of Aldersgate United Methodist Church of Marion, IL for many years. He also was a lifetime member of the Fellowship Masonic Lodge No. 89 AF & AM of Marion, IL. Ray was extremely proud of his grandchildren, Heather and Chad, and the education they pursued. He was a man of honesty, never wavering integrity, and humility. He loved to make quiet little quips, much to the enjoyment of his family. He could always be found cleaning and polishing his car or doing something outside. The many memories that have been created will now be cherished by those he leaves behind. He is survived by his daughter and son-in-law, Raylene and Jerry Rolinski of Carmel, IN; granddaughter, Heather Rolinski of Noblesville, IN; grandson, Chad Rolinski and his wife, Michelle of Charlotte, NC, other extended family and many good friends. He was preceded in death by his parents and wife. Arrangements for Raymond “Ray” Parks, Jr. were entrusted to Wilson-McReynolds Funeral Home, 900 N. Court St., Marion, IL. The visitation for the family and friends was from 1:30 p.m. to 2:30 p.m. on Saturday, January 18, 2014, at the funeral home. Following the time of visitation the funeral service was at 2:30 p.m. with Rev. Rick Pierce presiding. The service began with Masonic Rites being accorded by Fellowship Masonic Lodge No. 89 AF & AM of Marion, IL. Those officers participating were Master, Jerry Liska; Chaplain, Charles D. Adams; Secretary, Pat Samples; Marshall, Bob Russell. Also participating were Bill Absher and Bob Wilson. The prelude and postlude musical selections were recorded piano selections. Special recorded vocal musical selections presented during the service were; “I Can Only Imagine” by Emerson Drive, “How Great Thou Art” by Carrie Underwood, “Amazing Grace” by Celtic Woman and “The Prayer” by Celine Dion and Andrea Bocelli. Interment followed next to his wife in Rose Hill Cemetery of Marion, IL. For those who preferred, memorial contributions were made to “Hospice of Southern Illinois”. Memorial contribution envelopes were available at the funeral home or were mailed in care of Wilson-McReynolds Funeral Home, P.O. Box 370, Marion, IL 62959. For additional information please contact the funeral home by calling 618-993-2131.

The family of Raymond "Ray" Parks, Jr. created this Life Tributes page to make it easy to share your memories.