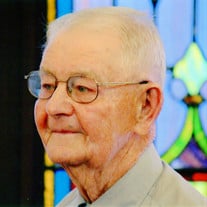 Raymond E. “Shorty” Broeking, age 96, of Marion, IL, passed away peacefully at 8:45 a.m. on Friday, January 20, 2017, in the Countryside Manor of Mt. Vernon, IL after a short illness. He was born on Thursday, May 6, 1920, on the family farm located west of Marion where the current Medical Center is now located, the son of Henry H. and Wilmina “Minnie” (Wickert) Broeking. Raymond never married and started his lifelong farming career as a young boy helping his father. After his father retired Raymond and his brother Edward took over the farming operation and continued until the farm was sold in the late 90’s for the new Heartland Regional Medical Center to be built. For his lifelong career in farming Raymond was featured on the cover of Prairie Farmer Magazine in July of 1977. Raymond was a lifelong member of Zion United Church of Christ of Marion. In his spare time he enjoyed spending time outdoors fishing and deer hunting. He also enjoyed meeting at some of the area's restaurants drinking coffee and spending time visiting with his many friends. Raymond loved and depended upon his six nieces and nephews and enjoyed the time they would spend together. The memories that have been created will now be cherished by those he leaves behind. He is survived by two nieces, Patti Nemeth and her husband Rick of Marion, IL and Jane Kutilek and her husband Frank of The Villages in Florida; four nephews, Larry Broeking and his wife Lynn and Gene Watson and his wife Carrie all of Marion, James Broeking and his wife Laura of Chicago, IL and Robert Windhorst and his wife Judy of Mt. Vernon, IL, a host of great nieces and great nephews, great-great nieces and great-great nephews, other extended family and many friends. He was preceded in death by parents; four sisters, Pauline Windhorst, Marie Watson, Lucille Broeking and Elsa Broeking; three brothers, brothers, William A. “Bill” Broeking who died during World War II in Italy, Edward H. Broeking and Albert Henry Broeking and infant niece, Beverly Broeking. Arrangements for Raymond E. “Shorty” Broeking were entrusted to Wilson-McReynolds Funeral Home, 900 N. Court St., Marion, IL. The visitation was from 2:00 p.m. until 5:00 p.m. on Sunday, January 22nd at the funeral home. During the time of visitation a “Reflection of Life” DVD Memorial Tribute featuring special people, places and events of Raymond’s life was presented to the family and friends. Visitation resumed after 9:30 a.m. on Monday, January 23, 2017, at Zion United Church of Christ, located at 930 West Cherry St., Marion, IL. Following the time of visitation the funeral service was at 11:00 a.m. with Pastor John Holst presiding. The prelude and postlude musical selections were presented by organist Doris Anderson. The tolling of the bell 96 times to represent Raymond’s life was done by Randy Jones. Special musical selection presented during the service was “It Is Well With My Soul” as a congregational hymn with organist Doris Anderson accompanying. Interment followed on the family lot in Old Rose Hill Cemetery of Marion. Pallbearers were Ryan Windhorst, Keith Soldner, Mark Kutilek, Darrell Broeking, Darren Watson and Frank Kutilek. Following the committal service at the cemetery the family and friends gathered back at the church for a meal and continued time of fellowship and support. For those who preferred, memorial contributions were made to “Zion United Church of Christ” and mailed in care of Wilson-McReynolds Funeral Home, 900 N. Court Street, Marion, IL 62959. Memorial envelopes were available at the funeral home and the church. For additional information please contact the funeral home by calling 618-993-2131.

The family of Raymond E. "Shorty" Broeking created this Life Tributes page to make it easy to share your memories.