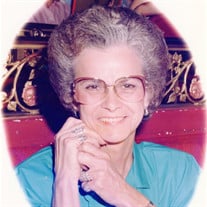 Rena L. Richey, 89, passed away at Heartland Regional Medical Center on October 5, 2017, with her loving family by her side. She was born at home on April 20, 1928, the oldest child of Omer and Stella (Bearden) Tanner. She worked hard beginning at a young age and helped raise her four siblings on a farm in a coal mining family near Dykersburg, Illinois, during the Great Depression, and she told stories of the difficult life they led. She would draw water from a well, clean clothes on a washboard, and help her own mother with gathering and preparing food for the family. She graduated from Crab Orchard High School in 1946. On March 27, 1948, she married the love of her life, Benjamin Eugene “Gene” Richey. They spent a wonderful 35 years of marriage together before she tragically lost him to a coal mining accident in 1983. They enjoyed a special bond while raising their four children, and Gene always made her laugh. In the years before Gene’s death, they loved playing cards and traveling with Rena’s sister and brother-in-law, Katherine and Russ Nicholls. Gene always had a funny story to tell about their adventures. Rena is survived by her loving children, all of Marion, IL, Suzanne Short, Larry Richey, Jeff Richey, and Beth (Gary) Phelps. Her beloved grandchildren, Travis (Carol Ann) Short of Marion, Amy (Dave) Klafeta of Decatur IL, Jill (Steve) Coombes of Paris, IL, J.C. (Sara) Richey of Herrin and Jamie Richey of Marion, Darcy (Phalicia) White of West Frankfort and Jake White of Marion; sister, Katherine Parker, of Marion; and special family friend, Susan Short, of Marion. Most of Rena’s life was spent being a loving wife to Gene, devoted mother to her four children, adoring grandmother to her seven grandchildren, and doting great grandmother of five and great step-grandmother of five. She worked for many years as a cashier at Small’s Grocery Store in Marion, and she never met a stranger. Rena’s joy was taking care of her family, and dinner was always on the table at 5:00 sharp, with her homemade cast-iron skillet cornbread at every meal. Chicken & dumplings were one of her prized dishes, and no one left her house with an empty stomach. Family time always included extended family at picnics in local state parks or simply sitting in the yard and waving at passersby. “Ma” was always willing to watch her grandchildren while her children worked, and she enjoyed her precious time with them. Rena also enjoyed crocheting and knitting, a craft taught to her by her mother, and won many awards at county fairs for her creations. She crocheted afghans for her family and to give as gifts, and also knitted dishcloths for the Marion Memorial Hospital gift shop. After Gene’s death, Rena spent time on bowling senior leagues at SI Bowl in Carterville and enjoyed many years there with friends. She lived with her daughter and son-in-law, Beth and Gary Phelps, for a time this summer before her health further declined. The family spent many sweet hours and days with her during this time, and she was pampered while there, enjoying her ice cream and cake every evening, as well as anything else she desired. Rena accepted Jesus Christ as her personal savior while attending a small country church as a young woman. Her children take great comfort in knowing that she is reunited with their Dad, and she was looking forward to seeing him again. The visitation for Rena L. Richey was on Sunday, October 8, 2017, from 11:00 a.m. until 1:00 p.m. with the funeral service at 1:00 p.m., at Wilson-McReynolds Funeral Home with Rev. Bobby Parker presiding. During the time of visitation “Reflection of Life” DVD Memorial Tribute featuring special people, places and events in Gene’s life was presented to the family and friends. Special recorded musical selections presented during the service were, “Amazing Grace” by Judy Collins and “In the Garden” by Jim Reeves. Interment followed in Rose Hill Cemetery in Marion, IL. Pallbearers were Travis Short, J.C. Richey, Jake White, Darcy White, Steve Coombes, and Dave Klafeta. If preferred, memorials may be made to the First Church of the Nazarene, 809 West White, Marion, IL 62959, and will be accepted at the funeral home. For additional information call the funeral home at 618-993-2131.

Rena L. Richey, 89, passed away at Heartland Regional Medical Center on October 5, 2017, with her loving family by her side. She was born at home on April 20, 1928, the oldest child of Omer and Stella (Bearden) Tanner. She worked hard beginning... View Obituary & Service Information

The family of Rena L. Richey created this Life Tributes page to make it easy to share your memories.

Send flowers to the Richey family.