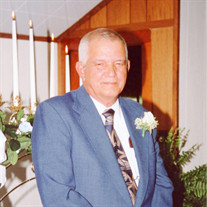 Rev. Gordon L. Smith, age 80, of rural Creal Springs, IL, passed away peacefully at 10:04 p.m. on Sunday, September 17, 2017, at his home. He was born on Tuesday, July 20, 1937, in Stonefort, IL the son of Rev. George Willis and Addie (Kennedy) Smith. Gordon attended school in Carrier Mills, IL and was a graduate of Carrier Mills High School Class of 1955. After graduation he moved to the Chicago, IL area and worked for about 5 years at the Johnson and Johnson Textile Factory. He returned to Southern Illinois about 1960 and answered the call of this nation by serving in the United States Army as a Medic. After his period of faithful service he was honorably discharged with the rank of Specialist 4th Class. After his discharge he began medical training at Missouri Baptist Hospital in St. Louis, MO and became an X-Ray Technician. He then began working in 1964, for Harrisburg Hospital in Harrisburg, IL in the X-Ray Department. While working in Harrisburg he met the love of his life, Doris Sue Tanner, who was working in the OB department. They were united in marriage on Friday, November 25, 1966, in the Good Hope Baptist Church located near Karbers Ridge in Hardin County, IL, and together they have shared nearly 51 years of marriage. After his marriage he moved near Decatur, IL and worked at St. Mary’s Hospital and later to the Mt. Vernon, IL area and worked at Good Samaritan Hospital for several years. He had always wanted to return to his home area. He moved back to the Creal Springs area, buying the farm where he presently lives, nearly 43 years ago. It was then that he began working at the Marion Veteran’s Hospital. He worked there for a total of 25 years with 20 of those years being in the X-Ray Department and the last 5 years with Grounds and Maintenance until his retirement in 1997. Gordon became an ordained Baptist minister and early in his life, and around 1974 he began preaching at many of the churches of the area. In 1991, he became a full-time pastor, serving at several churches of the area, including Palestine Social Brethren Church of Carrier Mills, Walnut Grove American Baptist located between Stonefort and New Burnside, IL, Freedom Free Will Baptist Church located south of Marion, IL, and the Antioch Baptist Church of Stonefort. He retired from the ministry in 2016, due to health reasons. He was a member of the Arnold View Freewill Baptist Church of Creal Springs. In his spare time he enjoyed watching St. Louis Cardinal Baseball, spending time in the outdoors, gardening, and earlier in his life working on his farm, raising cows, pigs, and chickens. His family was a very important part of his life and he was always interested in all of their many activities. He loved the many times they all would be together and treasured the many memories that were created. He is survived by his wife, Sue Tanner of rural Creal Springs; daughter and son-in-law, Angela and Bo Powell of Paducah, KY; six grandchildren, Kristin Powell of Lima, Peru, Benjamin Powell of Miami, FL, Jacob Powell of Pensacola, FL, Alex Blaise of Marion, Nicholas Blaise of Murphysboro, IL, and George Blaise of Creal Springs; two brothers and sisters-in-law, Charles and Mona Smith of Marion and Leonard and Betty Smith of Harrisburg, IL, a host of nieces, nephews, cousins, other extended family, and many friends. He was preceded in death by his parents; daughter, Amy Leigh (Smith) Blaise on January 30, 2015, and two brothers, Bob and Richard Smith. Arrangements for Rev. Gordon Lee Smith were entrusted to Wilson-McReynolds Funeral Home, 900 N. Court St. of Marion. The visitation was from 10:00 a.m. until 1:00 p.m. on Saturday, September 23, 2017, at Arnold View Free Will Baptist Church, located at 5115 Arnold View Lane, Creal Springs, IL 62922. During the time of visitation a “Reflection of Life” DVD Memorial Tribute featuring special people, places and events in Gordon’s life was presented to the family and friends. Following the time of visitation the funeral service was at 1:00 p.m. with Pastor Ivan Ryan and Pastor William “Bud” McDannel presiding. The service began with Cathy Owens singing “God of the Mountain” as a accapella selection. Other vocal musical selections presented during the service were “He’s Been So Good to Me” by Kenny Orr and “What a Day That Will Be” as a congregational hymn, led by Kenny Orr, with Diane Ryan accompanying both on the piano. The postlude musical selections were recorded piano selections by Gordon’s daughter Angela. Interment followed in Bolton-Trammel Cemetery, located near Stonefort, IL with Pastor Jeff Owens presiding. Pallbearers were Benjamin Powell, Jacob Powell, Jerry Tanner, Ron Tanner, Alex Blaise and Nicholas Blaise. Military honors were accorded at the graveside by members of American Legion Honor Guard of Harrisburg Post # 167 and Carrier Mills Post # 364 and the Illinois National Guard Funeral Honors Burial Detail of Marion. The flag was folded by the members of the Illinois National Guard Funeral Honors Detail and presented to Gordon’s wife Sue. Following the committal service at the cemetery the family and friends gathered back at Arnold View Church for a meal and continued time of fellowship and support. For those who preferred, memorial contributions were made to either or both “Heartland Baptist Mission for Kristin Powell” or “Bolton-Trammel Cemetery” and mailed in care of Wilson-McReynolds Funeral Home, 900 N. Court Street, Marion, IL 62959. For additional information please call the funeral home at 618-993-2131.

The family of Rev. Gordon Lee Smith created this Life Tributes page to make it easy to share your memories.

Send flowers to the Smith family.