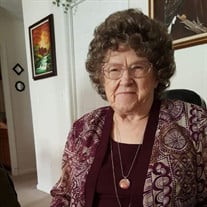 Rev. Wilma Dean Burroughs, age 93, of Marion, IL, passed away peacefully with her family near, at 8:08 p.m. on Friday, December 31, 2021, in Heartland Regional Medical Center of Marion, IL. She was born at home in Williamson County, IL, on September 14, 1928, the daughter of Newton Oral Walker, Sr. and Celestia Marjorie (Roberts) Walker. Wilma was first united in marriage to PFC Tilford Raymond Jones, Jr. on November 16, 1946, in Williamson County, IL and together they shared over 7 years of marriage until he was killed in action during the Korean War on March 22, 1954. She then was united in marriage to Roy L. Johnson on April 10, 1955, in Corinth, MS, and together they shared nearly 29 years of marriage until his death on February 27, 1984. Later in the 1980’s she was united in marriage to Grover Barron and they only shared about 1 year of marriage when he passed away. Several years later, she was united in marriage to Paul Laverne Burroughs on December 8, 1998, in Marion, and together they shared 21 years of marriage until his death came on June 11, 2019. Early in her life when she was in her 20’s, Wilma was called into the ministry. Over the years she has traveled the region preaching in many churches of the area. It was very easy for her to spread the “Gospel of the LORD” to all she came in contact with. She once held a 3-week revival at the McKinney Chapel Church near the Lake of Egypt. Her and her mother enjoyed traveling around to the area senior care centers singing, playing the piano and organ and spreading the good news of Jesus to the residents. She was of the Apostolic faith and also enjoyed going the Marion Senior Citizen Center having a meal and visiting with everyone. She enjoyed reading her bible daily, playing the piano and organ, singing, gardening, canning, drawing and painting. She especially loved animals and enjoyed watching all of the birds feeding on her feeders. She currently has a Parrot in her home, that she named “Randy” that was very talkative, and she enjoyed very much. She was known by many for her good cooking; especially her dressing, often called the “Best Dressing Ever” by many, and her homemade pies. She was often asked for her recipes and her regular response was “It’s just a little of this and that.” The many memories that have been created will now be cherished by those she leaves behind. She is survived by her son, Randal Lee Johnson and wife, Amy of Marion; three daughters, Angela D. James and husband, Allen of Goreville, IL, Patricia Wilson of Marion and Katheryn Wheelus and husband, Clifford of Macon, GA; seven grandchildren, Blake Johnson of Vienna, IL, Kendal Johnson of Marion, IL, Jeremy James and wife, Heather of Goreville, IL, Cassie Ater and husband, Chris of Goreville, IL, Dawnetta Navarre and husband, Nathan of McHenry, IL, Roxanne Street and husband, Howard of Juliet, GA and Sean Wheelus of Dudley, GA; thirteen great grandchildren, Brandon James, Sierra James, Sadie James, Buddy James, Jersie Puckett, Vivian Ater, Sarah Navarre, Nicholas Navarre, Logan O’Neil, Trenton Wheelus, Bryson Street, Addison Wheelus and Serenity Wheelus; sister, Alma Lee Perry of the Poordo, IL area, a host of nieces, nephews, other extended family and many friends. She was preceded in death by her parents; four husbands; brother, Newton Oral Walker, Jr. and sister, Evelyn Marjorie Marshall. Arrangements were entrusted to Wilson-McReynolds Funeral Home, 900 North Court Street, Marion, IL. The visitation was on Wednesday, January 5, 2022, from 11:00 a.m. to 1:00 p.m. at the funeral home. During the time of visitation, a “Reflection of Life” DVD Memorial Tribute featuring special people, places and events in Wilma’s life was presented to the family and friends. Following the time of visitation, the funeral service was at 1:00 p.m. with Pastor Kenny Perry and Pastor Oral Perry presiding. Also participating were Corey Perry presenting the old song “Graduation Day” and Shannon Perry read the “Hold Your Fork” story. The prelude and postlude musical selections were presented by pianist, Rena Bell. Special recorded vocal musical selections presented were “I’ll Not Fear the Crossing” by The Crabb Family and “Carry Me Jesus” by Michael Combs. Other special vocal musical selections presented were “On the Wings of a Snow-White Dove” and “Amazing Grace” both by Rena Bell who accompanied herself on the piano. Toward the end of the service the congregation sang “When We All Get to Heavan” with Rena Bell accompanying on the piano. Many of the Perry Family Members gathered in front and led the congregation singing. Interment followed next to her husband, Roy Johnson in the Rose Hill Cemetery of Marion, IL. Pallbearers were Cory Perry, Jeremy James, Shannon Perry, Ethan Perry, Ricky Jo Perry and Joe Mathis. Following the committal service at the cemetery the family and friends gathered at the Pentecostals of Lick Creek Family Life Center for a meal and continued time of fellowship and support. The family requested for those who preferred, memorial contributions be given to “St. Jude Children’s Research Hospital.” For additional information call the funeral home at 618-993-2131.

Rev. Wilma Dean Burroughs, age 93, of Marion, IL, passed away peacefully with her family near, at 8:08 p.m. on Friday, December 31, 2021, in Heartland Regional Medical Center of Marion, IL. She was born at home in Williamson County, IL, on... View Obituary & Service Information

The family of Rev. Wilma Dean Burroughs created this Life Tributes page to make it easy to share your memories.