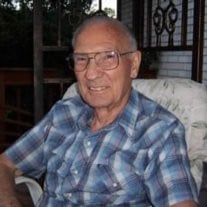 Rex Lee Lantrip, age 90, of Orland Park, IL, formerly of Johnston City, IL, passed away peacefully at 9:30 a.m. on Sunday, October 27, 2013, at his home. He was born on Sunday, July 8, 1923, the son of Fred and Virginia (Pollard) Lantrip. Rex was united in marriage to Betty Sprague on November 4, 1942, in Cape Girardeau, MO and together they enjoyed over forty-seven years of marriage until her death on March 19, 1990. He answered the call of the nation in February of 1943, during the time of WW II by serving in the United States Army. During his period of service he was involved in battles and campaigns in Italy, Southern France and Germany. He earned a Bronze Star in February 1945, for risking his life while under heavy artillery fire to aid others. After his period of faithful service he was honorably discharged in November 1945. Returning home after his service, he and Betty settled in Johnston City, IL where he worked as a coal miner. After an explosion at the mine in West Frankfort, IL in December of 1951, he moved his family to Lemont, IL to live near and work with his brother, Raymond at Martin Oil Company. He retired as a truck driver and has resided in Orland Park, IL for the last 54 years. He is survived by his daughter, Sandy Heitmann of Tinley Park, IL and her companion, Ron Milen; son and daughter-in-law Jimmie and Jacalyn Lantrip of Columbia, TN; five granddaughters, Heather Santarelli and husband, Richard of Homer Glen, IL, Heidi Cody and husband, Joseph of Chicago, IL, Laurie Delk (husband, Bryan who is deceased) of Columbia, TN, Linda Harvey and husband, Jason of Cypress, TX and Jaime Graham and husband, Scott of Culleoka, TN and 15 great-grandchildren. Rex is also survived by his niece, Janice George of Lemont, IL; nephew, Jack Williams and his wife, Asha of Villa Nova, PA; many members of his wife’s family residing in Marion, IL including, Joanne and Bill Olsen, Paul and Carole Sprague, Maxine Sprague, Lucy Sprague, Peggy Robinson and her husband, Paul and Jeanetta Sexton and her husband, Paul of Baldwin Park, CA as well as many other nieces and nephews by marriage. He was preceded in death by his parents, wife; two sisters, Ila F. O’Daniell and Marie Williams; and brother, Raymond Lantrip. Arrangements for Rex Lee Lantrip were entrusted to the Wilson-McReynolds Funeral Home, 900 N. Court Street, of Marion, IL. The time of visitation was from 9:00 a.m. until 11:30 a.m. on Saturday, November 2nd, at the funeral home. During the time of visitation a “Reflection of Life” DVD Memorial Tribute featuring special people, places and events of Rex’s life was presented to the family and friends. Following the time of visitation the funeral service was at 11:30 a.m. with Pastor Tom Sprague presiding. Also participating in the service were Rex’s daughter, Sandy Heitmann presenting the eulogy; granddaughters, Heidi Cody and Heather Santarelli reading special scriptures and great-grandsons, Michael and Matthew Santarelli presenting comments of memory. The prelude and postlude musical selections were presented by pianist, Lori Creamer. Special vocal musical selections presented were “In the Garden” and “The Lord’s Prayer” both by Lori Creamer who also accompanied herself on the piano. Also presented was the recorded vocal musical selection “How Great Thou Art” by Elvis Presley. Interment followed in East Lawn Memorial Gardens Cemetery of Energy, IL. Pallbearers were Dan Seeley, Joseph Cody, Richard Santarelli, Richie Santarelli, Michael Santarelli and McClain Delk. Military honors were accorded at the graveside by members of Heyde-Pillow V.F.W. Post No. 1301, American Legion Post No. 147 and Illinois National Guard Flag Detail all of Marion, IL. Those participating were Commander, Larry Largent; Chaplain, Dan Fruge; Bugler, Jim Grieme; Officer of the Day, Pat Campbell; National Colors, Ron Ganzer; VFW Colors, Bill Reynolds; American Legion Colors, Bob Casey; Color Guard, Jessie James and Bill Rice and Firing Squad, Don Burgrabe, Bill Hatfield, Nate Hopkins, Wayne O’Connor, Fred Read, Ron Russell and George Trammell. Members of the National Guard Flag Detail participating in the folding of the flag were SSGT Brandon Page, SGT David Kemner and SGT Jeremie Moon. Presentation of the flag to Rex’s son, Jimmie was by SSGT Brandon Page. Following the committal service at the cemetery the family and friends gathered at Ryan’s Restaurant of Marion, for a meal and continued time of fellowship and support. For those who preferred, memorial contributions were made to “The Alzheimer’s Association of Greater Chicago”. Memorial contribution envelopes were available at the funeral home or were mailed in care of Wilson-McReynolds Funeral Home, P.O. Box 370, Marion, IL, 62959. For additional information please contact the funeral home by calling 618-993-2131.

The family of Rex Lee Lantrip created this Life Tributes page to make it easy to share your memories.

Send flowers to the Lantrip family.