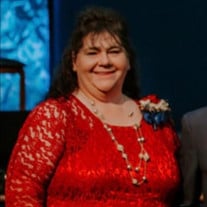 Rhonda R. Roberts Dickson, age 55, of Marion, IL, passed away peacefully with her family near, at 6:21 p.m. on Friday, September 24, 2021, in Landmark Hospital of Cape Girardeau, MO. She was born on December 12, 1965, in Joliet, IL, the daughter of Floyd Wilson and Dorothy Faye (Burns) Roberts. Rhonda grew up in Benton, IL, attending school in Benton, and was a graduate of Benton High School Class of 1984. She continued her education attending at Rend Lake College. She was united in marriage to John Benninghoff Dickson on February 17, 1990, in the First United Methodist Church of Benton, and together they have shared over 31 years of marriage. Her working career since 2003, has been the Marion Unit II School System at the Longfellow Elementary Grade School, a huge part of her life and viewed the children as her own. All the children that attended at Longfellow Elementary School she had contact with, from kindergarten up to 5th grade and had influenced many children lives in a very positive way. She was in charge of the “After Cats” school program and a supervisor of “Homework Club.” She also served as a lunch time and recess time supervisor and had been a school crossing guard. She was a member of Cornerstone Church of Marion, and on the Children’s Church Team called “NextGen.” She was known for being and avid Chicago Cubs fan and Disney enthusiast, making several trips to Disney World in Florida, with her family. Another special time of the year that she loved was “Christmas Time”, putting up many trees throughout her home and decorating every corner. Her family was a very important part of her life and was very proud of her children and being a “Nana” to her granddaughter, Eliana. She always was interested in all their many activities and encouraged them in all their endeavors. Whether it was coaching pre-K soccer or attending musicals and games, the memories created will now be cherished by those she leaves behind. She is survived by her husband, John B. Dickson of Marion; two daughters, Brittany Willis and husband, Ian and Bailey Dickson all of Marion; son, John Austin Dickson and wife, Hailee of Marion; granddaughter, Eliana Willis of Marion; two sisters, Laura Karch and husband, Carl of Arnold, MO and Sandy King and husband, Mark of Arnold, MO; two brothers, Michael Roberts and wife, Jody of La Porte, IN and Kenny Roberts of Herrin, IL; father-in-law, Rev. Elmer Dickson of Bradenton, FL; sister-in-law, Beth Boerema and husband, Chuck of Rochelle, IL; brother-in-law, Paul Dickson and wife, Kelly of Charlotte, NC, a large host of extended family and many friends. She was preceded in death by her parents and mother-in-law, Jean Dickson. Arrangements were entrusted to Wilson-McReynolds Funeral Home, 900 North Court Street, Marion, IL. The visitation was on Wednesday, September 29th, from 3:00 p.m. to 8:00 p.m. at the funeral home. Visitation resumed on Thursday, September 30, 2021, from 10:00 a.m. until 11:00 a.m. at Cornerstone Church, located at 2705 Walton Way, Marion. During the times of visitation, a “Reflection of Life” DVD Memorial Tribute featuring special people, places and events in Rhonda’s life was presented to the family and friends. Following the visitation, the funeral service was at 11:00 a.m. with Pastor Michael Nave presiding. T he service began with the recorded musical selection “On the Wings of a Snow White Dove” by Ferlin Huskey. Special vocal musical selections presented during the service were “Raise a Hallelujah” and “How Great Is Our God” by Dustin, Nathan and Chesney with Nathan accompanying on the guitar and Chesney accompanying on the keyboard. The service concluded with the recorded vocal musical selection “Where You Lead I Will Follow” by Carole King. Following the service, the family and friends gathered at the Methodist Church in Benton, IL, for a meal and continued time of fellowship and support. Interment followed later in the afternoon at 2:30 p.m. in Masonic & Odd Fellows Cemetery of Benton, IL, with Pastor Matt Crain presiding. Pallbearers were Kaleb Roberts, Josh Roberts, Tyler Roberts, Tim Karch, Mike Roberts and Charlie Roberts. The family requested for those who preferred, memorial contributions be given to, Longfellow Elementary School payable to “Longfellow PTO.” For additional information call the funeral home at 618-993-2131.

The family of Rhonda Renee Roberts Dickson created this Life Tributes page to make it easy to share your memories.