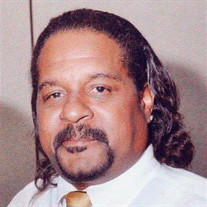 Richard D. Foster, Jr., age 55, of Marion, IL, formerly of the Chicago, IL area, passed away at 4:58 p.m. on Sunday, May 17, 2015, at Heartland Regional Medical Center of Marion, IL. He was born on Saturday, December 26, 1959, at Lewis Memorial Hospital in Chicago, IL the son of Richard D. Foster, Sr. and Sylvia (Franklin) Foster. Richard attended school in the Chicago area at Garrett A. Morgan Elementary School and was a graduate of Calumet High School. He accepted Christ at an early age at Eastern Star Missionary Baptist Church of Chicago. Richard moved to the Marion, IL area in 2007. He was united in marriage to Janice L. Walls on Friday, May 2, 2008, in Marion, IL and together they have shared the last 7 years. Richard loved the outdoors and worked in the lawn care business for many years. Since living in Marion, he worked for several years in maintenance and custodial for the Boyton Street Community Center until his health did not permit. He was a member of Paul’s Chapel Missionary Baptist Church of Marion, IL. In his spare time he enjoyed playing and watching sports, playing the bass guitar, playing dominos and spades and was active in the community. He enjoyed spending time with his family and many friends and the many memories that have been created will now be cherished by those he leaves behind. He is survived by his wife, Janice Walls Foster of Marion, IL; mother, Sylvia Foster of Hazel Crest, IL; two sisters and brothers-in-law, Phyllis Davis and her husband, Willie of Lake Worth, FL and Christie Foster-Murray and her husband Dax of Chicago, IL; three brothers and one sister-in-law, Peter Foster, Joseph Foster and his wife, Angela and Brian Foster all of Chicago, IL; four step grandsons, Andre C. Jackson and his wife Krista, Marcus L. Bell, Travis T. Pickens and T. Octavius Pickens all of Marion, IL, five step great grandchildren; four sisters-in-law, Margaret Walls of Marion, IL, LaBarbara Walls and husband Earl Mitchell of Carbondale, IL, LaTanya Walls-Jenkins and her husband, Roscoe of Marion, IL and Karen Walls of Lucedale, MS; nine brothers-in-law, Fredrick Walls of Indianapolis, IN, Daniel Walls of Evansville, IN, Michael Walls of Los Angeles, CA, Reginald Walls and his wife, Chanell of DuQuoin, IL, Dovass Kendrick of Marion, IL, Ravendo Kendrick of Marion, IL, Val Kendrick of St. Louis, MO, Kenneth Walls and his wife, Pat of Toledo, OH and Kevin Walls and his wife Jocelyn of Hattiesburg, MS, a host of nieces, nephews, other extended family and many friends. He was preceded in death by his father, Richard D. Foster, Sr. on October 22, 2003; stepson, Coron Octavius Walls on June 5, 1975 and step daughter, Tina Marie Pickens on September 8, 2010. Arrangements for Richard D. Foster, Jr. were entrusted to the Wilson-McReynolds Funeral Home, 900 N. Court Street, of Marion, IL. The time of the visitation was from 10:00 a.m. to 12:00 noon on Tuesday, May 26, 2015, at Paul’s Chapel Missionary Baptist Church located at 902 South Monroe Street, Marion, IL. Following the time of visitation the funeral service was at 12:00 p.m. with Rev. Virgil Walton, Jr. and Rev. Daniel Walls presiding. During the service there were many “Expressions of Love” presented by those attending the service. The processional and recessional musical selections were presented by pianist Tommy Carter. Special vocal musical selections presented during the service were “Don’t You Want to Go to That Land” and “Lord I Want You to Help Me” both by Joe Buchanan and “Precious Lord Take My Hand” by Roscoe Jenkins. Interment followed in Maplewood Cemetery of Marion, IL. Pallbearers were Ray Walls, Joseph Foster, Dovass Kendrick, Peter Foster, Ravendo Kendrick, Tim McElrath and Brian Foster. Following the service at the cemetery the family and friends gathered back at Paul’s Chapel Missionary Baptist Church for a meal and continued time of fellowship and support. For those who preferred, memorial contributions were made to “Wilson-McReynolds Funeral Home”, to help with final expenses, and mailed in care of Wilson-McReynolds Funeral Home, P.O. Box 370, Marion, IL 62959. Memorial envelopes were available at the funeral home and the church. For additional information please contact the funeral home by calling 618-993-2131.

The family of Richard Douglas Foster Jr. created this Life Tributes page to make it easy to share your memories.

Send flowers to the Foster family.