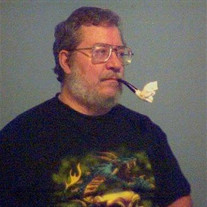 Richard Lee Marchal, age 70, of Marion, IL, passed away peacefully at the home of his son, Bryan, at 9:04 a.m. on Saturday, April 21, 2018 in Marion. He was born on Saturday, February 7, 1948, in Alton, IL, the son of Ellsworth Philip and Gracia Lee (Horn) Marchal. While he was young he spent most of his time living in Massachusetts and attended school in Chatham, MA, while his father was in the Coast Guard. The family later moved to Centralia, IL, and Richard attended high school there and was a graduate of Centralia High School Class of 1966. While he was in high school he was Editor in Chief of the school newspaper, Sphinx Newspaper. He continued on with his education attending Southern Illinois University of Carbondale, IL where he received his Master Degree of Chemistry. While working in the lab at Herrin Hospital he met and fell in love with Janis Ree Wolaver. They were united in marriage on February 13, 1985, in Marion and together they shared over 33 years of marriage until her death on Saturday, March 3, 2018. Richard was self employed owning and managing his computer company Lionheart Automations of Marion. It was a networking company serving doctors, lawyers, and accountants. He also had worked part time as a professor in the organic chemistry lab at John A. Logan College of Carterville, IL. He was a member of the area Chess Club, having played chess since high school, and also a Friend of the Marion Carnegie Library, where he had served as an officer. In his spare time he enjoyed doing genealogy, fishing, being outdoors taking pictures of all kinds, bird watching and feeding the animals, spending time at the ocean, and making handmade jewelry that he sold online. Also in 2006, he won the contest “Yahoo Answers” that was sponsored by Yahoo. This was something he was very proud of. He loved his family, especially his grandchildren, and was always interested in all of their many activities. Those he leaves behind will now cherish the many memories that have been created. He is survived by two daughters and sons-in-law, Heather and Dan Rinderer of Breese, IL and Daniella and Bobby Hewitt of Christopher, IL; three sons and daughters-in-law, David and Stephanie Marchal of McKinney, TX, Phillip and Yvonne Marchal of Carterville, IL ,and Bryan and Vanessa Marchal of Marion, fourteen grandchildren; great grandson, Phillip Miner; sister and brother-in-law, Linda and Jeff Ludwa of Melbourne, FL; sister-in-law, Kella Marchal of Alton, IL; brother-in-law, Greg Wolaver and his wife Carol of Marion; sister-in-law, Jo Ellen Middleton and her husband Joe of Hartwick, NY, a host of nieces and nephews, other extended family and many friends. He was preceded in death by his parents; wife; grandson, Wesley Marchal; sister, Patricia Marchal; and two brothers, David E. Marshall and Robert Glenn Marchal. Arrangements for Richard L. Marchal have been entrusted to Wilson-McReynolds Funeral Home, 900 N. Court St., Marion. The visitation will be from will be from 5:00 p.m. until 6:00 p.m. on Monday, April 30, 2018, at the funeral home. Following the time of visitation those attending will be given the opportunity to share memories of Richard during this special time. For those who prefer, memorial contributions may be made to either or both; “Southern Illinois Earth Science Club” and or “Crab Orchard National Wildlife Refuge” and mailed in care of Wilson-McReynolds Funeral Home, 900 N. Court Street, Marion, IL 62959. Memorial envelopes will be available at the funeral home. For additional information please contact the funeral home by calling 618-993-2131.

The family of Richard Lee Marchal created this Life Tributes page to make it easy to share your memories.