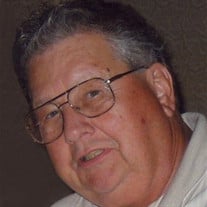 Richard James Riepl, age 77, of Marion, IL and formerly of Crest Hill, IL passed away peacefully at 12:04 p.m. on Wednesday, May 20, 2015 at home. He was born in Elgin, IL on Wednesday, March 9, 1938, the son of James M. and Otillia (Hensen) Riepl. He grew up in Elgin and attended St. Mary’s Grade School and graduated from St. Edward High School. He was united in marriage to Diane E. Schwake on Saturday, July 11, 1959 in Bartlett, IL and together shared over fifty-five years of marriage. He was a member of St. Joseph Catholic Church of Marion, IL. For many years he was an employee of Montgomery Ward and was a Merchandise Manager at the time of his retirement. He always liked to keep busy and enjoyed buying and selling oil paintings. He is survived by his wife, Diane E. Riepl of Marion, IL; two daughters, Julie A. Peterson and husband, Ken and Jeanette C. Suski and fiancée, Mark Allen; Son, Richard W. Riepl; granddaughter, Brittany Suski; sister and brother-in-law, Kathryn M. and James Kelly; sister-in-law, Gayle Riepl; several nieces, nephews, other extended family and many friends. He was preceded in death by his parents; brother, James Riepl; two sisters, Mary Jane Seyller and husband, Ken and Joan Vandelinder. Arrangements for Richard J. Riepl were entrusted to Wilson-McReynolds Funeral Home, 900 N. Court St., Marion, IL. According to his wishes a private memorial service was held on Friday, May 22, 2015 with Rev. Monsignor Thomas D. Flach presiding. Memorial contributions may be made to either “Hospice of Southern Illinois” or “American Diabetes Association” and mailed in care of Wilson-McReynolds Funeral Home, P.O. Box 370, Marion, IL 62959. Memorial envelopes are available at the funeral home. For additional information please call the funeral home at 618-993-2131.

The family of Richard J. Riepl created this Life Tributes page to make it easy to share your memories.

Send flowers to the Riepl family.