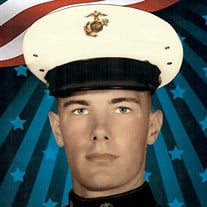 Richard M. Soldner, age 79, of New Braunfels, TX, formerly of Marion, IL, passed away peacefully at 3:40 p.m. on Saturday, February 19, 2022, in Oak Tree Assisted Living of New Braunfels, TX. He was born on Friday March 27, 1942, in Carbondale, IL, the son of Melvin Edward Soldner and Theresa Evelyn (Roberts) Soldner. Richard answered the call of this nation in April of 1962, by serving in the United States Marine Corps. After his period of faithful service, he was honorably discharged with the rank of Corporal in 1965. He graduated from Marion High School in 1960, and went on to graduate with a bachelor’s degree in Advanced Technical Studies from Southern Illinois University Carbondale in 1988, after his period of faithful service in the Marine Corps. Throughout his life, Richard worked in a variety of places. Initially he worked for Johns Manville Company as a Salesman, then he worked at IBM in Houston TX. Later, he worked for Allstate Insurance Company as a claims adjuster. In 1977, he started working with the Southern Pacific Railroad as a Switchman and worked his way up to the level of Engineer. In 1986, he returned to Marion, IL, which is when he earned his bachelor’s degree from Southern Illinois University of Carbondale, IL. While living in Marion, he worked at the Williamson County Circuit Clerk’s Office as a Supervisor for two years until 1994, when he retired and moved back to Texas. While living in Marion in his younger years, he was raised as a member of the Zion United Church of Christ. In his spare time, Richard loved spending time with animals especially his beloved dog, Tinley Grace. He also enjoyed driving and caring for motorcycles as well as sports cars throughout his life. He was loved by his family and friends and the many memories created will now be cherished by those he leaves behind. He is survived by his two nieces Alyssa Rooker, and husband, Chris of Katy, TX and Andrea Kirkpatrick of Baytown, TX; his best friend/life companion Marilee Fowler and her daughter, Kim Fowler as well as other family members and many friends. He was preceded in death by his parents and two sisters, Marilyn Soldner and Jane Clair. Arrangements are entrusted to Wilson-McReynolds Funeral Home, 900 North Court Street, Marion, IL. The visitation will be from 12:00 noon to 1:00 p.m. on Tuesday, March 1, 2022, at the funeral home. Following the time of visitation, the funeral service will be at 1:00 p.m. with Rev. Louis Fluck presiding. Interment will follow in Rose Hill Cemetery of Marion, IL. Military honors will be accorded at the graveside by members of Marion V.F.W. Heyde Pillow Post No. 1301 Funeral Honors Detail and members of the United States Marine Corps Funeral Honors Detail. The family has requested for those who prefer, memorial contributions be made to “St. Francis Animal Shelter.” Memorial contributions may be mailed in care of Wilson-McReynolds Funeral Home, 900 N. Court Street, Marion, IL, 62959. Memorial contribution envelopes will be available at the funeral home. For additional information call the funeral home at 618-993-2131.

The family of Richard Melvin Soldner created this Life Tributes page to make it easy to share your memories.

Send flowers to the Soldner family.