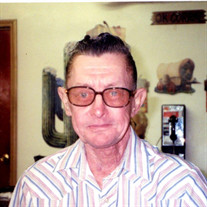 Robert E. “Andy” Anderson, age 79, of West Frankfort, IL, former longtime resident of Marion, IL, passed away peacefully at 2:45 a.m. on Wednesday, April 15, 2020, at his home. He was born on Friday, October 4, 1940, in Jasper, TX, the son of Chester Earl and Bertha Irie Byrd Anderson. Andy was united in marriage to Paulette Sue Anderson, on Friday, January 17, 1969, in the Church of God, located on West Main St. in Marion; and together they shared 45 years of marriage until her death on Tuesday, August 12, 2014. Andy’s working career was with the Marion Water Department for 32 years until his retirement in 2001. He attended at the Heights Church of God of West Frankfort. In his spare time he enjoyed fishing, hunting and loved to dance. He always enjoyed the times the family all would be together and cherished the many memories that were created. He is survived by his son, Bruce Anderson of Herrin, IL; brother-in-law, Ron Swafford and his wife, JoAnn of Marion, IL; two nephews, David Anderson of Houston, TX and Dana Anderson of Mobile, AL; niece, Tanya Feltz and husband, Carl of Crab Orchard, IL; three great nieces, Whitney Feltz of Crab Orchard, IL, Lara Feltz of Huntingburg, IN and Maria Swafford of Marion, IL; close friend and companion for the last 5 years, Brenda Butler of West Frankfort, IL, other extended family and many friends. He was preceded in death by his parents, wife and brother, Henry “Buck” Anderson. Arrangements have been entrusted to Wilson-McReynolds Funeral Home, 900 N. Court St., Marion. DUE TO HEALTH CONCERNS RELATED TO THE COVID-19 VIRUS AND BY THE SIGNING OF EXECUTIVE ORDER BY THE ILLINOIS GOVERNOR, there will not be visitation or funeral services currently. The graveside committal service will be announced at a later date. Interment will be next to his wife, Sue in Rose Hill Cemetery of Marion, IL For those who wish, memorial contributions may be made to “Hospice of Southern Illinois”. Memorial contributions may be mailed to the Wilson-McReynolds Funeral Home, 900 North Court St., Marion, IL 62959. For additional information call the funeral home at 618-993-2131.

The family of Robert Earl "Andy" Anderson created this Life Tributes page to make it easy to share your memories.