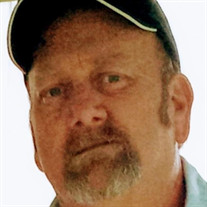 Robert W. Billingsley, age 56, of Marion, IL, passed away peacefully with his family near from a 10-month battle with terminal cancer, at 8:57 a.m. on Wednesday, April 13, 2022, at his home. He was born on March 6, 1966, at Holloman Air Force Base, of New Mexico, the son of William Clark Billingsley, Jr. and Dara Diann (Maupin) Billingsley. He attended school in Amarillo, TX and was a graduate of Palo Duro High School Class of 1984. He continued his education attending at Eastern New Mexico University of Roswell, NM, where he received his Associate Degree in Criminal Justice. Robert was united in marriage to Kimberly Ann Ellison on October 10, 2001, in Goreville, IL, and together they have shared nearly 21 years of marriage. His working career included being a mechanic, automotive restoration, over the road truck driver, electrician and over all handy man. He was a jack of ALL trades and MASTER of most. He was of the Protestant faith and a follower of Jesus Christ. In his spare time, he enjoyed restoring older vehicles and loved traveling, having been in every state except Hawaii. He is survived by his wife, Kim A. Billingsley of Marion; son, Robert Thomas Billingsley and wife, Ryleigh of Marion; mother, Dara Diann Ornelas of Clinton, OK; step-daughter, Amber Tripp of Marion; step-son, Adam Connor of Colorado; step-grandson, Ben of Williamson County, IL; four sisters, Lisa Cordova of San Antonio, TX, Karen Aguilar and husband, Gilbert of Amarillo, TX, Carrie Shack of Houston, TX and Sonia Moncado and husband, Juan of Clinton, OK; three brothers, Clark Billingsley of Clinton, OK, Michael Billingsley and wife, Kim of Portales, NM, and Joseph Scolavino of Amarillo, TX; step-mother, Marjorie Ford and husband, George of Goreville, IL, other extended family and many friends. He was preceded in death by his father and step-daughter, Asia Ellison Flemmings. Arrangements are entrusted to Wilson-McReynolds Funeral Home, 900 North Court Street, Marion, IL. In accordance with his wishes, there will not be any type of public services at this time. For additional information call the funeral home at 618-993-2131.

The family of Robert W. Billingsley created this Life Tributes page to make it easy to share your memories.

Send flowers to the Billingsley family.