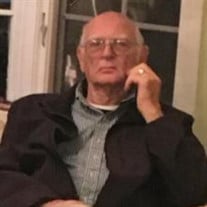 Robert D. “Bob” Borchelt, age 83, of Marion, IL, former longtime resident of Cape Girardeau, MO, passed away peacefully with his family near, at 8:22 a.m. on Friday, June 26, 2020, at his home. He was born on Sunday, November 22, 1936, in Cape Girardeau, MO, the son of Ivan Weldon and Eva Gaynell (Green) Borchelt. Bob, as he was known by, attended school in Cape Girardeau and was a graduate of Central High School of Cape Girardeau. He answered the call of this nation by enlisting into the United States Navy in 1956, and after his period of faithful service was honorably discharged in 1958, with the rank of Seaman. Bob was united in marriage to Louise Frances LaCroix, on Saturday, April 11, 1959, in St. Mary’s Cathedral of Cape Girardeau, and together they have shared over 61 years of marriage. His working career was with Rust & Martin Interior Design of Cape Girardeau, overseeing their upholstery department for 38 years. After he retired from Rust & Martin in 2001, he opened up his own business called Borchelt’s Upholstery there in Cape Girardeau and operated it until he totally retired in 2008, and it was then he moved to Marion, IL, to be near his family. He was a former longtime active member of St. Mary’s Cathedral of Cape Girardeau and when he moved to Marion, he became a member of St. Joseph Catholic Church of Marion. He was always active in the community. When he was younger he was a member of the Exchange Club of Cape Girardeau. Something he loved being involved with was the St. Vincent DePaul Society of Cape Girardeau where he served as President for 25 years. He also was a 4th Degree Knight and a member of the Knights of Columbus Council 1111 of Cape Girardeau, the Elks Club of both Marion and Cape Girardeau, a lifetime member of the American Legion of both Marion and Cape Girardeau and also taught upholstery at a Vocational School for 17 years. In his spare time he enjoyed hunting in Montana and Colorado, fishing in Canada, Alaska and North Dakota, woodworking, camping and had traveled the world. He loved his family and always enjoyed the many times they all would be together. The many memories that have been created will now be cherished by those he leaves behind. He is survived by his wife, Louise F. Borchelt of Marion; daughter and son-in-law, Mary Ann and Stephen Brown of Marion; four grandsons, Stephen Nicholas Brown and his wife, Sarah of Marion, Jordan Michael Brown and his wife, Erin of Marion, Christopher Randall Brown and his wife, Stevie of Makanda, IL and Bryan Robert Brown of Carbondale, IL; great granddaughter, Annie Lucille Hutchcraft of Carbondale, IL; two great grandsons, Brecken Michael Brown and Tucker Randall Brown both of Marion, and another soon to be born great granddaughter, Frankie Gale Brown, other extended family and many friends. He was preceded in death by his parents; two sisters, Dorothy Ann Ramsey and Edith Jane Anderson and brother, Dale Alfred Borchelt. Arrangements have been entrusted to Wilson-McReynolds Funeral Home, 900 N. Court St., Marion. The funeral mass will be private at St. Joseph Catholic Church, located at 600 North Russell St. of Marion with Rev. Father Brian Barker presiding. For those who prefer, memorial contributions may be made to “Hospice of Southern Illinois”. Memorial contributions may be mailed to the Wilson-McReynolds Funeral Home, 900 North Court St., Marion, IL 62959. Memorial envelopes will also be available at the church. Military honors will be accorded at church by members of Heyde-Pillow V.F.W. Post No. 1301 of Marion, and members of the United States Navy Funeral Honors Burial Detail. For additional information call the funeral home at 618-993-2131.

The family of Robert Don "Bob" Borchelt created this Life Tributes page to make it easy to share your memories.