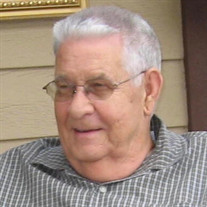 Robert Lee (Bob) Holderfield, 89, of Marion, IL, passed away peacefully with his only daughter Dianne at his side at 5:08 a.m. Tuesday, October 13, 2020, in the Marion VA Community Living Center. What a blessing his wife Shirley was able to share part of his last three earthly days with him. Born on Monday, September 7, 1931 in Marion, IL, he was the son of Virgil and Lorene (McDannel) Holderfield. After the early death of his father while he was a toddler, he was raised by his mother and stepfather Herbert Hill, losing both of them as a young man. Bob attended school in Marion and was a graduate of Marion High School Class of 1949. He was united in marriage to Shirley Jane Campbell on Sunday, June 10, 1951 in Marion and together they have shared over 69 years of marriage. Bob enlisted into the United States Navy in February of 1952 during the time of the Korean War and faithfully served until he was honorably discharged in January of 1956 with the rank of Yeoman 1st Class. Returning home after his service, Bob attended Southern Illinois University at Carbondale for a time then began work at the Sangamo Ordinance Plant, located west of Marion. The majority of his career was at the United States Postal Service in Marion, retiring in 1991 with 33 years of federal service. During his early years at the post office, he would deliver newspapers on rural routes from his car and also worked at Martin’s Service Station on Court Street to make ends meet. Bob was a Christian man and from his youth attended and was an active member of Warder Street Baptist Church in Marion. He served as a Deacon, taught Sunday School and served as Financial Secretary for many years. Bob took his family on a lot of vacations across the U.S. in their Coleman pop-up camper and, while they were still able, he and Shirley took many car trips visiting grandchildren and great-grandchildren. He enjoyed working crossword puzzles, the occasional scooter ride and most of all his family. In his words, “Know that I love my family more than I can express.” He is survived by his wife Shirley Jane Holderfield and children Thomas Lee Holderfield, Robert Daniel (Cindy) Holderfield, and Robyn Dianne (Bryan) Noakes; daughter-in-law Phillis Mae Holderfield; grandchildren Robert (Mercel) Holderfield, Jeanette (John) Rogers, Elric (Sarah) Holderfield, Elwyn (Junna) Holderfield, Elvin Holderfield, Lorene Holderfield, and Olivia Noakes; great-grandchildren Mila and Eli Holderfield, John and Jaxson Rogers, and Remy, Adi and Emmett Holderfield; brother Jim Holderfield (Karyle) and sister Sue Rushing. Bob was a beloved member of his wife Shirley’s “Campbell family”, survived by many extended family members there as well as many Holderfields and Hills. He was preceded in death just two months and one day by his beloved son Timothy Ray (TR, as Bob called him); daughter-in-law Remy; parents Virgil and Lorene; step-father Herbert; two brothers John and Herbert “Burr”; sisters-in-law Ethel Browder Holderfield and Shirley Hill; brother-in-law William Carl Rushing and several beloved members of his wife’s Campbell family, Holderfields and Hills. Thank you to the beautiful people at the Marion VA who cared for Bob as well as his wife and daughter. A special thank you to his son-in-law Bryan’s niece Tiffany (Noakes) Baldi who brightened Bob’s day each time she was able to visit. Loving appreciation to Bob’s brother Jim (Karyle) Holderfield and his daughters Debbie, Rhoda and Jo and Debbie’s spouse Ricky, for their supportive involvement. Arrangements were entrusted to Wilson-McReynolds Funeral Home, 900 N. Court St., Marion. The visitation was from 10:00 a.m. until 11:00 a.m. on Friday, October 16, 2020, at the funeral home. During the time of visitation a “Reflection of Life” DVD Memorial Tribute featuring special people, places and events in Bob’s life was presented to the family and friends. Following the visitation the funeral service was at 11:00 a.m. with Rev. Phil Sheumaker presiding. Also during the service several people attending presented comments of special memories about Bob. The prelude and postlude musical selections were presented by pianist, Terry Ragain. Special recorded vocal musical selection presented during the service was “Amazing Grace/Going Home” by Ronan Tynan, Brian Byrne and Royal Philharmonic Orchestra. Interment followed in Oddfellows Cemetery of Marion. Pallbearers were Edward Troxel, Ricky Owens, Shawn Parks, Dan Bradley, Dave Simmons and Mike Caraker. Military honors were accorded at the cemetery by members of the Heyde-Pillow V.F.W. Post No. 1301 of Marion, and members of the United States Navy Funeral Honors Burial Detail. During the folding of the flag the recorded musical selection “America the Beautiful” was presented. The flag was then presented to Bob’s wife, Shirley. For those who preferred, memorial contributions were made to “The Veteran’s Community Living Center”. Memorial contributions were mailed in care of Wilson-McReynolds Funeral Home, 900 N. Court Street, Marion, IL 62959. Memorial contribution envelopes were also available at the funeral home. For additional information call the funeral home at 618-993-2131.

Robert Lee (Bob) Holderfield, 89, of Marion, IL, passed away peacefully with his only daughter Dianne at his side at 5:08 a.m. Tuesday, October 13, 2020, in the Marion VA Community Living Center. What a blessing his wife Shirley was able to... View Obituary & Service Information

The family of Robert "Bob" Lee Holderfield created this Life Tributes page to make it easy to share your memories.

Send flowers to the Holderfield family.