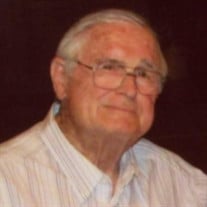 Robert D. “Bob” Ramsey, age 80, of Marion, IL passed away peacefully with his family by his side at 12:45 p.m. on Saturday, August 13, 2016, in Heartland Regional Medical Center of Marion. He was born on Wednesday, August 14, 1935, in Nickerson, KS the son of Dean and Evelyn (Israel) Ramsey. Bob attended school in Grayville, IL and was a graduate of Grayville High School Class of 1954. He then answered the call of this nation in 1954, during the time of the Korean War, by serving in the United States Air Force and after his period of faithful service was honorably discharged in 1958. Bob was united in marriage to Laura L. Short on Friday, June 10, 1955, in Grayville and together they have shared over 61 years of marriage. His working career was with WSIL Channel 3 Television Station as an engineer for 16 years and later worked for the Continental Tire Company of Mt. Vernon, IL for 23 years as an electrician. Bob was of the Protestant faith. He was involved in organizing a muzzle loading club in Williamson County in the 1980’s that later became the Williamson County Gun Club and served as the secretary/treasurer for 16 years. In his spare time he enjoyed wood working, was a ham radio operator with his call letters being K9YHN, was an avid St. Louis Cardinal fan and going out and watching the Miners play and reloading ammunition. He also was a lifetime member of the National Rifle Association and enjoyed playing the guitar and giving lessons. All through his life he was always busy but the most important part of his life was his family. He was always interested and supported all of their activities, especially those of his grandchildren and great grandchildren, and looked forward to the times they gathered together. The many memories that were created will now be cherished by those he leaves behind. He is survived by his wife, Laura L. Ramsey of Marion; daughter, Terri S. Murphy of Marion; son, Robert D. Ramsey, Jr. and his wife Gayle of Baton Rouge, LA; two granddaughters, Chelsey Cox and her husband Brenden of Chatham, IL and Tabitha Robinson and her husband Todd of Marion; four grandsons, Daniel Murphy and his wife April, Jeremy Murphy, Justin Ramsey and Nicholas Ramsey all of Marion; eight great grandchildren, Jacob Murphy, Jace Murphy, Michael Robinson, Kayauna Murphy, Aubree Robinson, Harmon Cox, Eleanor Cox and Rylee Robinson; brother, Jim Ramsey and his wife Brenda of Danville, IN; daughter-in-law, Bryanna K. Ramsey of Goreville, IL, other extended family and many friends. He was preceded in death by his parents and son, Micheal Kent Ramsey on January 8, 1998. Arrangements for Robert D. “Bob” Ramsey were entrusted to Wilson-McReynolds Funeral Home, 900 N. Court St., Marion, IL. The visitation was from 5:00 p.m. until 7:00 p.m. on Wednesday, August 17th, at the funeral home. The funeral service was at 11:00 a.m. on Thursday August 18, 2016, with Bob’s close friend Tom Reed presiding. The prelude and postlude musical selections were recorded piano selections. Special recorded vocal musical selections presented during the service were “When I Get Where I Am Going” by Brad Paisley and Dolly Parton, “You Raise Me Up” by Josh Grobin and “See You Again” by Carrie Underwood. Interment followed near his son, Micheal in Rose Hill Cemetery of Marion. Pallbearers were Daniel Murphy, Jacob Murphy, Todd Robinson, Nicholas Ramsey, Joe Hale and Bob Hill. Military honors were accorded at the graveside by members of Heyde-Pillow V.F.W. Post No. 1301 and the American Legion Post No. 147 both of Marion and the United States Air Force Funeral Honors Burial Detail. Those participating were Commander, Larry Largent; Chaplain, Ron Ganzer; Officer of the Day, Pat Campbell, Bugler, J.J. Rice; National Colors, Ernie Rinella;V.F.W. Post Colors, Rodger Morris; Color Guard, Bob Casey and Jessie James and Firing Squad, Bill Hampsey, Tim Payne, Ron Russell, George Trammel and Chris Payne. Members of the United States Air Force Funeral Honors Burial Detail participating in the folding of the flag were Airman First Class Brandon Parmely and Airman First Class Nathaniel Chipelo. During the folding of the flag the special instrumental musical selection “America the Beautiful” was presented. Presentation of the folded flag to Bob’s wife Laura was by Airman First Class Brandon Parmely. Following the committal service at the cemetery the family and friends gathered at the First Baptist Church in Herrin, IL for a meal and continued time of fellowship and support. For additional information please contact the funeral home by calling 618-993-2131.

The family of Robert Dale "Bob" Ramsey created this Life Tributes page to make it easy to share your memories.