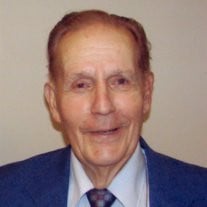 Robert W. Duncan, age 92, lifelong resident of Marion, IL except for the time he served in the Navy, passed away peacefully with his family by his side at 10:00 p.m. on Saturday, October 12, 2013, at his home. He was born in Marion, IL on Monday,... View Obituary & Service Information

The family of Robert W. Duncan created this Life Tributes page to make it easy to share your memories.

Send flowers to the Duncan family.