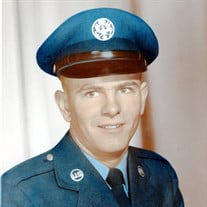 Robert D. Durham, age 80, of Marion, IL, passed away peacefully at 2:59 a.m. on Sunday, February 19, 2017, in Herrin Hospital of Herrin, IL. He was born on Friday, May 29, 1936, in Marion, IL, the son of Harold and Sophie (Galyean) Durham. He grew up in Marion and was a graduate of Marion High School Class of 1954. Shortly after graduation he enlisted into the United States Air Force in November of 1954, beginning his long career in the military. During his service he served in the Vietnam War from October of 1967 thru October of 1968. After 25 years of service, he was honorably discharged in June of 1979, with the rank of Senior Master Sergeant. While serving in the military and after his basic training and schooling, his first assignment was in Burtonwood, England, where he met and married the love of his life Myra Worthington. They were united in marriage in Liverpool, England, on Tuesday, September 14, 1957, and together they have shared over 59 years of marriage. In 1979, after retiring from the military he returned to Marion, and began a new career with the State of Illinois by first working at the truck scales. He later transferred to the Illinois Department of Revenue and remained there until he retired in 1999. He loved his large family and was always interested in all of their many activities and enjoyed the weekly gatherings and special times at the holidays. The many memories that have been created will now be cherished by those he leaves behind. He is survived by his wife, Myra Durham of Marion; three sons and daughters-in-law, Dean and Chris Durham of Lick Creek, IL, Joe and Julie Durham of Percy, IL and Bob and Pat Durham of Marion; daughter, Zena Phillips of Marion; four grandchildren, Myra Rogowski and husband Justin and Cortney Grassl and husband Jonah all of Marion, Kyle Joel Durham of St. Charles, MO and Kim Holder and husband Riley of Creal Springs, IL, eight great grandchildren; brother and sister-in-law, James “Dubber” and Thelma Durham of Marion; sister and brother-in-law, Sharon and Louis Short of Marion, his cherished family in England, several nieces and nephews; lifelong military buddies, Bill “Tiny” Sinkler and Joe Hunter, other extended family, and many friends. He was preceded in death by his parents; sister, Virginia Willems and her husband John and infant brother, Harold Durham. Arrangements for Robert D. Durham have been entrusted to Wilson-McReynolds Funeral Home, 900 N. Court St., Marion, IL. The time of the visitation will be from 10:00 a.m. until 1:00 p.m. on Thursday, February 23, 2017 at the funeral home. Following the time of visitation, the funeral service will be at 1:00 p.m. with Pastor Mark Mohler presiding. Interment will follow in Egyptian Memorial Gardens in Energy, IL. Military honors will be accorded at the graveside by members of Heyde-Pillow V.F.W. Post No. 1301 and American Legion Post No. 147 both of Marion and members of the United States Air Force Funeral Honors Burial Detail. For those who prefer, memorial contributions may be made to “The American Heart Association” and mailed in care of Wilson-McReynolds Funeral Home, 900 N. Court Street, Marion, IL 62959. Memorial envelopes will be available at the funeral home. For additional information please contact the funeral home by calling 618-993-2131.

The family of Robert Dean Durham created this Life Tributes page to make it easy to share your memories.

Send flowers to the Durham family.