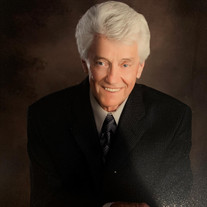 Robert Roy Landes passed away peacefully in his home, overlooking his shade garden, on Thanksgiving Day. Robert and his twin brother, Richard, were born at home on the Landes family farm in Edgar County on May 12, 1941. His parents were Roy and Anna (Perisho) Landes. He also had a sister, Dorothy Murphy. The whole family was very active in 4-H where they raised and showed horses and cows. Robert loved motorcycles and fast cars. He enjoyed telling stories about them, such as selling livestock to buy his first car, a ‘48 Studebaker. He had a ‘33 Ford that he cut the top off of to make into a convertible, and he rolled his blue ‘56 Ford and had to dig himself out. Robert graduated from Kansas High School in 1959. After high school, Robert worked as an aircraft welder at MECO, in Paris, IL. He moved to Southern Illinois in 1964 to attend the Vocational Technical Institute. He was such a good welder that VTI asked him to teach adult education courses while he completed his degree at SIU. He discovered that he loved teaching so much that he changed his major to education. His first and only job after graduation was at John A. Logan College, where he was a welding and metallurgy instructor for 30 years. He took great pride in being a good teacher and in the success of his students. Robert left instructions for his obituary to include that he had a “passion for racing anything with a fast motor and wheels”. At some point, Robert raced go-karts, odysseys, motorcycles, stock cars, and modified midget cars – most of which he built on his own. Robert was the president of Southern Illinois Modified Midget Association for 10+ years and was instrumental in building and developing the Southern Illinois Raceway in Marion, IL. Robert won many local and regional races and was the National Modified Midget Association national champion in 1990. Robert married Mary Helen Gough, his high school sweetheart, in 1965. They had 2 children, Rob (Jessica) Landes of Marion, IL and Tracy Brangle (Patrick) of St. Louis, MO. Robert was fully invested in his children’s lives. He practiced sports with them in the backyard, coached their teams, and attended all their events as kids and then completed countless home and yard projects for them as adults. He knew (or could figure out how) to do anything. He always gave us unconditional love, complete support, and believed in us more than we believed in ourselves. The smile that went all the way to his eyes was in great supply when he was with his 4 grandchildren: Abby Erker (Andrew), Elizabeth Landes, and Amelia Brangle, all of St. Louis, and Payton Robert Landes of Denver, CO. He adored being their “Papa”. Arrangements were entrusted to Wilson-McReynolds Funeral Home, 900 N. Court Street, Marion, IL. The visitation was from 11:00 a.m. until 12:30 p.m. on Saturday, December 12, 2020 at the funeral home. During the time of visitation a “Reflection of Life” DVD Memorial Tribute featuring special people, places and events in Robert’s life was presented to the family and friends. Following the time of visitation the memorial service was at 12:30 p.m. Comments of memory were presented by close friend, Kevin Dunaway and family members, Rob Landes, Abby Erker, Libby Landes and Tracy Brangel. Also during the service another special DVD Tribute was presented. The service concluded with the special vocal musical selection “PaPa’s Song” presented by Andrew Erker who accompanied himself on the guitar. In lieu of flowers, the family requested donations in Robert’s memory to be made to “John A. Logan Foundation” or “Hospice of Southern Illinois”. For more information call the Funeral Home at 618-993-2131

Robert Roy Landes passed away peacefully in his home, overlooking his shade garden, on Thanksgiving Day. Robert and his twin brother, Richard, were born at home on the Landes family farm in Edgar County on May 12, 1941. His parents were Roy... View Obituary & Service Information

The family of Robert Roy Landes created this Life Tributes page to make it easy to share your memories.

Robert Roy Landes passed away peacefully in his home, overlooking...

Send flowers to the Landes family.