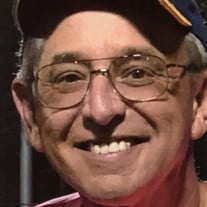 Robert Lee Melton, age 63, of rural Marion, IL, passed away peacefully with his family near, at 9:26 p.m. on Monday, July 26, 2021, at his home. He was born on Saturday, July 12, 1958, in Carmi, IL, the son of Curtis Howard and Bonnie Odell (Gunnels) Melton. Robert grew up in Crossville, IL, attending school there and was a graduate of Crossville High School Class of 1977. He was united in marriage to Rhonda Jo Moake, on Saturday, August 20, 1983, in her parents’ home in Marion, and together they have shared nearly 38 years of marriage. At a young age he started working for area farmers of White County, IL, and in the oil fields for several years. Later he began working for Roland Machinery of Carterville, IL, as a diesel mechanic and outside parts salesman for 28 years until his health forced him to retire. He was a former member of Cana Baptist Church, located southeast of Marion, for several years. He later transferred his membership and was a current member of the Second Baptist Church of Marion. In his spare time, he was an avid outdoorsman and loved deer hunting, fishing, camping and gardening. He also enjoyed playing in the church basketball league and was a passionate coach and referee of Upward Basketball at his church. He was a very enthusiastic University of Kentucky basketball fan. His family was a very important part of his life and his favorite title for the last 13 years was “Papa” to his 5 wonderful grandkids. In his quiet times you could always find him cuddled up with his little pup, “Daisy Mae.” The many memories that have been created will now be cherished by those he leaves behind. He is survived by his wife, Rhonda J. Melton of Marion; three daughters and two sons-in-law, Hilary and Mark Johnson of Marion, Hailey and Benjamin Bloyer of Janesville, WI, and Hannah Melton of Indianapolis, IN; four granddaughters, Molly, Paisley and Andie Johnson and Kora Bloyer; grandson, Finnigan Bloyer; mother-in-law, Dixie Pruitt of Marion; five sisters, Rebecca Sutton and husband, John of Evansville, IN, Sally Wilson of Tallahassee, FL, Betty Gregory of Cleveland, TN, Patricia Welch and husband, Mark of Macomb, IL and Sandra Smith of Columbus, GA; three brothers, Walter Melton and wife, Karen of Chattanooga, TN, James Melton of Anchorage, AK and John Melton of Norris City, IL; two brothers-in-law, Gary Moake and wife, Rhonda of Marion and Jesse DeLap of Norris City, IL, a host of nieces and nephews, other extended family and many friends. He was preceded in death by his parents and other family members; Maxine DeLap, Harold Melton, David Gregory, Bill Wilson, Donald Pruitt and George Moake. Arrangements have been entrusted to Wilson-McReynolds Funeral Home, 900 North Court Street, Marion, IL. The visitation will be on Friday, July 30th, from 5:00 p.m. to 8:00 p.m. at the funeral home. The funeral service will be on Saturday, July 31, 2021, at 11:00 a.m. at Wilson-McReynolds Funeral Home with Pastor Kenneth Blumenstock and Pastor Gordon Montgomery presiding. Interment will follow in Rose Hill Cemetery of Marion, IL. The family requests for those who prefer, memorial contributions be given to “Siteman Cancer Center.” Memorial contributions may be mailed in care of Wilson-McReynolds Funeral Home, 900 N. Court Street, Marion, IL, 62959. Memorial envelopes will be available at the funeral home. For additional information call the funeral home at 618-993-2131.

The family of Robert Lee Melton created this Life Tributes page to make it easy to share your memories.

Send flowers to the Melton family.