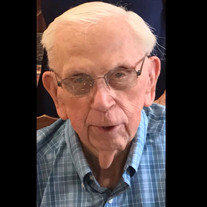 Robert V. (Bob) Power, 91, formerly of Marion, IL, passed away on Friday, November 17, 2017 at his home in North Port, FL. Bob, the son of John A. and Mary Ellen (Powers) Power, was born Friday, June 4, 1926 in rural Bellflower, IL. He was a member of the 1944 graduating class at Bellflower Township High School. He was united in marriage to Margaret J. (Rude) Martin on October 5, 1957 at St. Joseph Catholic Church in Marion, sharing more than 47 years of happy marriage until her death May 15, 2005. After serving 19 months in the U.S. Army Air Corps, Bob enrolled at St. Louis University, where he graduated in 1950 with a degree in accounting. He then moved to Marion to take a position as a junior accountant with the Gray Hunter Stenn & Co. CPA firm. His entire career was with that organization, where he rose from junior accountant to senior accountant and became a partner and later a managing partner. He retired in 1989 and he and Margaret spent several winters at their winter home in Venice, FL combing the beach for shark’s teeth and seashells. For several years, they delivered for Meals on Wheels, and Bob volunteered at the Marion Food Pantry. Robert was a lifetime member of the Marion BPOE #800 and a Charter Member of the Marion KC Council 6210, where he obtained 4th Degree status. He joined St. Joseph Catholic Church when he moved to Marion, and over the years served in various capacities as usher, Eucharistic minister, a member of the original parish council and a trustee. Robert is survived by his brother, John A. Power, of Bellflower, IL. He is also survived by the five children and stepchildren (and their spouses ) that he and Margaret raised – Dr. Sam W. Martin and his wife, Darlene Martin of Dickinson, TX; Dr. Don Martin and his wife , Dr. Lynn Martin of Marion, IL; Jane Sharp and her husband, F. Rozier Sharp of North Port, FL; Dr. John D. Power and his wife, Lori Power of Marion , IL; and Mary Ann (Power) Gonser of Arlington, VA; 13 grandchildren and 17 great grandchildren; his extended family, and many friends. Bob was preceded in death by his parents, a brother, James F. Power, and six sisters: Mary A. Brown, Margaret Neal, Helen Christian, Teresa Brewer, Alma Hermes, and Cecelia Tudor. Arrangements for Robert V. (Bob) Power have been entrusted to Farley Funeral Home of North Port, FL and Wilson-McReynolds Funeral Home in Marion, IL. Funeral Mass will be at 10:00 a.m. on Saturday, December 9th, at St. Joseph Catholic Church, 600 Russell St., Marion, IL 62959. In lieu of flowers, memorial contributions may be made to either the “Marion Food Pantry” or “Birthright” of Bloomington, IL. Interment will follow next to his wife, Margaret in Rose Hill Cemetery of Marion. For additional information call the funeral home at 618-993-2131.

The family of Robert V "Bob" Power created this Life Tributes page to make it easy to share your memories.

Send flowers to the Power family.