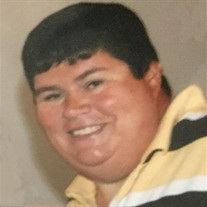 Robert E. “Rob” Pritchett, Jr., age 48, of Marion, IL, passed away surrounded by his family at 10:21 p.m. on Wednesday, October 18, 2017, in Barnes-Jewish Hospital of St. Louis, MO. He was born on Thursday, November 21, 1968, in Marion, IL the son of Robert Eugene Pritchett, Sr. and Mary Kathleen (Walden) Pritchett. Rob attended school in Marion and was a graduate of Marion High School Class of 1986. After graduation he continued his education in Electrical Engineering at Southern Illinois University of Carbondale, IL. Rob was united in marriage to Katrina L. Turner on Saturday, June 16, 2007, at Immanuel Lutheran Church of Murphysboro, IL and together they have shared 10 years of marriage. His working career began after college with CIPS/Ameren for a period of time. After he left CIPS he worked for Oscar’s Service of Marion and later for Sullivan Electric, beginning in the telecommunications division and later in the electrical division. Rob later became an electrical journeyman and served in the apprentice program as a wireman with the IBEW. In December of 2013, he began his own business, R & R Electrical Company of Marion, specializing in both commercial and residential electrical and was owner and operator until the time of his death. He was of the Baptist faith. He also was a member of the National Electrical Contractors Association, IBEW Local Union No. 702 and the Marion Elks BPOE No. 800. In his spare time he enjoyed spending time outdoors, working on his land. He also was an avid St. Louis Cardinal fan and went to many of the games during the season. Though he always kept busy working and doing other interests, the love of his life was spending time with his daughter Allie and was always interested in all of her many activities. The many memories that have been created will now be cherished by those he leaves behind. He is survived by his wife, Katrina L. Pritchett of Marion; daughter, Allie M. Pritchett of Marion; father and mother, Robert “Bob”, Sr. and Mary “Kathy” Pritchett of Marion; two sisters and one brother-in-law, Wendi Pritchett of Marion and Amanda and Randy Stanley of Thompsonville, IL; two brothers and one sister-in-law, Ricky and Denise Pritchett of Staunton, IL and Rusty Pritchett of Goreville, IL, eight nieces and nephews, one great nephew, other extended family, and many friends. Arrangements for Robert E. “Rob” Pritchett, Jr. have been entrusted to Wilson-McReynolds Funeral Home, 900 N. Court St., Marion. The visitation will be from 4:00 p.m. until 8:00 p.m. on Monday, October 23rd, at the funeral home. The funeral service will be at 11:00 a.m. on Tuesday, October 24, 2017, with Pastor Steve Shea presiding. Interment will follow in Shiloh Cemetery, located south of Marion, IL. For those who prefer, memorial contributions may be made to either or both “St. Jude’s Children’s Hospital” and/or “Shiloh Cemetery” and mailed in care of Wilson-McReynolds Funeral Home, 900 N. Court Street, Marion, IL 62959. Memorial envelopes will be available at the funeral home. For additional information, call the funeral home at 618-993-2131.

The family of Robert E. "Rob" Pritchett Jr. created this Life Tributes page to make it easy to share your memories.