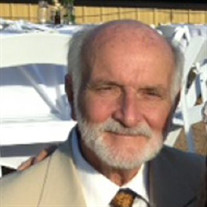 Robert B. “Robbie” Greenwood, age 78, lifelong resident of Marion, IL, passed away at 10:56 p.m. on Friday, September 26, 2014, in Heartland Regional Medical Center of Marion, IL. He was born on Thursday, December 12, 1935, in Carbondale, IL the son of George Brady and Mary Edna (Calhoun) Greenwood. Robbie attended school in Marion and was a graduate of Marion High School in 1953. He went on with his education by attending Southern Illinois University of Carbondale, IL and received his Bachelors degree in Business Education in 1959. After graduation he was united in marriage to Helen Keay Wallace on Sunday, August 21, 1960, in Marion, IL and together they have shared the last fifty-four years of marriage. His early working years was with Marion Pepsi Cola for several years. Later he began his career in education with the Marion Unit II School System teaching general business and accounting at Marion High School for over 30 years until his retirement in 1994. After his retirement in 1995, seeing the importance of education, he opened “Kid Academy” for preschooler’s and later “Skyline Academy Elementary” in 2000. He is a member of the First United Methodist Church of Marion, IL and former member and treasurer of the Marion Elks Club B.P.O.E. No. 800. He is survived his wife, Helen Keay Greenwood of Marion; daughter, Ashleigh Keay Couty and her husband, Chris of Marion; granddaughter, Cheridan Keay Couty and grandson, Tyler Couty and wife, Heather all of Marion; two nephews, Scott Watson of Herrin and Drew Watson of Marion, other extended family and many friends. He was preceded in death by his parents and sister, Georgia Watson. Arrangements for Robert B. Greenwood were entrusted to the Wilson-McReynolds Funeral Home, 900 N. Court Street, of Marion, IL. The time of visitation was from 5:00 p.m. until 8:00 p.m. on Tuesday, September 30th at the funeral home. During the time of visitation a “Reflection of Life” DVD Memorial Tribute featuring special people, places and events in Robbie’s life was presented to the family and friends. The funeral service was at 1:30 p.m. on Wednesday, October 1, 2014, at Wilson-McReynolds Funeral Home with Rev. Jeff Van Dyke presiding. Rev. Van Dyke also read a special letter of memory called “A Tribute to a Friend” that was written by Jim Reid. The prelude and postlude musical selections were recorded piano selections. Special recorded vocal musical selections presented during the service were “Dream” by Frank Sinatra, “Smile” by Nat King Cole and “I Did It My Way” by Frank Sinatra. Interment followed in Rose Hill Cemetery of Marion, IL. Honorary pallbearers were Jim Reid and Charles Boatright. Active pallbearers were Carl Aronson, Brad Humes, Brett Ray, Scott Watson, Randy Lynn and Dave Fisher. Following the committal service at the graveside the family and friends gathered at Robbie’s daughters home, Ashleigh for a meal and continued time of fellowship and support. For those who preferred, memorial contributions were made to “Robert B. Greenwood Memorial Education Fund”. Memorial contribution envelopes were available at the funeral home or were mailed in care of Wilson-McReynolds Funeral Home, P.O. Box 370, Marion, IL, 62959. For additional information please contact the funeral home by calling 618-993-2131.

The family of Robert B. "Robbie" Greenwood created this Life Tributes page to make it easy to share your memories.