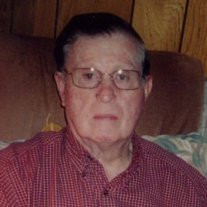 Robert Lee “Bob” Aldridge, age 87, of Marion, IL, passed away peacefully, surrounded by his family, at 10:40 p.m., on Sunday, June 23, 2013, at his home. Bob was born in Harrisburg, IL, on Wednesday, July 1, 1925, the youngest child of John Wesley and Bessie (Jenkins) Aldridge. He was united in marriage to Norma Lee Vaughn on Sunday, November 17, 1946, in Harrisburg, IL and together they have shared nearly sixty-seven years of marriage. In 1950, Norma gave birth to their son, David. They lived in Harrisburg until 1974, when Bob and Norma moved to Marion. In both Harrisburg and Marion, Bob was a faithful part of Jesus’ Church. He and Norma were members of Dorrisville Baptist Church while living in Harrisburg and after moving to Marion became active members of First Baptist Church. Bob has served in many positions of the church including Deacon, Sunday School Superintendent, teacher and he served on many boards and committees of the church. He also was a lifetime member of the Harrisburg Masonic Lodge No. 325 and the IBEW Local Union No. 702. Bob was an exceptional worker. As a young man, he lived and worked briefly in Michigan. Upon returning to Southern Illinois, he began a long career with the Southeastern Electric Co-Op, where he first worked as a lineman and then a supervisor and trainer for a team of lineman. He worked for the Co-Op for thirty-eight years before retiring in 1987. After retirement, he and Norma traveled around the country enjoying their time together. Bob was an avid outdoorsman and reader. He loved spending time with and going on adventures with his family. He will be greatly missed by his family and many friends. Bob set an example for all of them of what it looks like to live life well. He was faithful to God and his family through all his life. He is survived by his wife, Norma L. Aldridge of Marion, IL; son and daughter-in-law, David and Karen Aldridge of Marion, IL; granddaughter, Hannah Aldridge of Pullman, WA; grandson, Robert “Rob” Aldridge and his wife, Rebecca of Clancy, MT; granddaughter, Sarah McNeece and her husband, Chris of Renton, WA; their three sons who are Bob’s great grandsons, Elijah, Will and Wyatt all of Renton, WA, other extended family and many friends. He was preceded in death by his parents; two sisters, Zella Cleary and Reba Hull and three brothers, Layton, William “Bill” and John Wayne Aldridge. Arrangements for Robert Lee “Bob” Aldridge were entrusted to Wilson-McReynolds Funeral Home, 900 N. Court St., Marion IL. The time of visitation for family and friends was on Wednesday, June 26th, from 5:00 p.m. until 8:00 p.m. at the funeral home. During the time of visitation a “Reflection of Life” DVD Memorial Tribute featuring special people, places and events of Bob’s life was presented to the family and friends. The funeral service was at 11:00 a.m. on Thursday, June 27, 2013, at Wilson-McReynolds Funeral Home with Dr. Bob Dickerson presiding. The prelude and postlude musical selections were presented by pianist, Byron Corzine. Special vocal musical selections presented during the service were “The Solid Rock” as a congregational hymn, led by Dr. Bob Dickerson and accompanied by pianist, Bryon Corzine and “The Lord’s Prayer” by Lori Creamer and accompanied by pianist, Bryon Corzine. Interment followed in Sunset Lawn Cemetery of Harrisburg, IL. Honorary pallbearers were Robert Kelley, Dr. Jerry Ford, Don Henard and Don Tisch. Active pallbearers were David Aldridge, Robert “Rob” Aldridge, Phil Aldridge, Jason Bond, Chris McNeece and Tyler Webb. After the service the family and friends gathered at First Baptist Church in Marion, for a meal and continued time of fellowship and support. For those who preferred, memorial contributions were made to either the “First Baptist Church Library Fund” or “Hospice of Southern Illinois”. Memorial contribution envelopes were available at the funeral home or were mailed in care of Wilson-McReynolds Funeral Home, P.O. Box 370, Marion IL, 62959. For additional information please contact the funeral home by calling 618-993-2131.

The family of Robert Lee "Bob" Aldridge created this Life Tributes page to make it easy to share your memories.