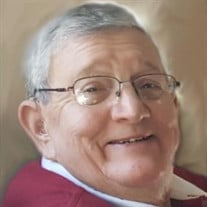 Rodger J Rodd, age 79, of Marion, IL, passed away suddenly with his family by his side at 3:49 a.m. on Tuesday, February 25, 2020, in the Heartland Regional Medical Center in Marion. He was born on Sunday, November 3, 1940, in Carbondale, IL, the son of Leonard R. and Kate (Lipe) Rodd. Rodger grew up in Marion and was a graduate of Marion High School Class of 1958 and continued his education at Westminster College Fulton, MO, Southern Illinois University Carbondale, IL, and The University of Maryland. He answered the call of his nation by serving in the United States Air Force from March 30, 1962, until the time of his honorable discharge on March 29, 1966. Rodger was united in marriage to Beth Baker on Sunday, February 17, 1963, at the First United Methodist Church in Marion, and together they shared over 57 years of marriage. Rodger last work as an Independent Loan Officer for various lending institutions and formerly as an Analyst for the National Security Agency in Fort Meade, MD, until 1974 when he and his family returned to Marion to work at Rodd Realty. He then was employed at the Olin Corporation as a Government Regulatory Coordinator and Personnel Supervisor before going to work at The H Group (Centerstone) in Marion, IL. He was a faithful and active member of the Aldersgate United Methodist Church for many years. He was also a member of the Optimist Club in Old Mill, MD, and the Lions Club in Marion, IL where he served as a President of both organizations. He also served on the Williamson County Building Commission Board for many years. In his spare time he enjoyed reading, fishing, arguing and debating politics, and family get togethers. He loved his family, church family and his many friends. He always enjoyed anytime they would get together and was always interested in the many activities especially when they played SKIPBO or attended the SIU ballgames. The many memories that have been created will now be cherished by those who knew and loved him. He is survived by his wife, Beth Rodd of Marion, IL; daughter and son-in-law, Robyn and Robert Pankey of Marion, IL; son and daughter-in-law, Jim and Tamara Rodd of Kenneth City, FL; three grandchildren, granddaughter Taylor Pankey of Carbondale, IL; grandson Will Pankey of Marion, IL and grandson Austin Rodd of Kenneth City, FL; three sisters, Barbara Bradley of Marion, IL, Geraldine Robbins of Davenport, IA and Sidney Minner of Lexington, NC, numerous nieces, nephews and other extended family and many friends. He was preceded in death by his parents, Leonard and Kate Rodd; father and mother-in-law, John and Helen Baker; brother, Dee L. Rodd and wife Ruth Rodd, three infant brothers and four brother-in- laws, Robert Bradley, Donald Minner, Chester Robbins and Tom Baker. Arrangements have been entrusted to Wilson-McReynolds Funeral Home, 900 N. Court St., Marion, IL. The visitation will be from 2:00 p.m. to 4:00 p.m. on Saturday March 7, 2020, at the Aldersgate United Methodist Church, 1201 North Fair St., Marion, IL. Following the time of visitation there will be a Memorial Service at 4:00 p.m. with Rev. Lance Leeds presiding and assisted by Rev. Bevan Stein. Following the service military honors will be accorded by the members of the Heyde-Pillow V.F.W. Post No. 1301 of Marion, and members of the Air Force Funeral Honors Burial Detail. For those who prefer, memorial contributions may be made to the “Kidney Foundation” and or to “Aldersgate United Methodist Church” and mailed in care of Wilson-McReynolds Funeral Home, 900 N. Court St, Marion, IL, 62959. Memorial envelopes will be available at the church. For addition information please call 618-993-2131.

Rodger J Rodd, age 79, of Marion, IL, passed away suddenly with his family by his side at 3:49 a.m. on Tuesday, February 25, 2020, in the Heartland Regional Medical Center in Marion. He was born on Sunday, November 3, 1940, in Carbondale, IL,... View Obituary & Service Information

The family of Rodger J. Rodd created this Life Tributes page to make it easy to share your memories.

Send flowers to the Rodd family.