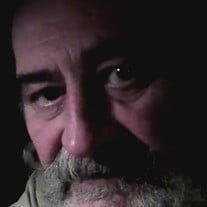 Roger Laverne Burroughs breathed his last and departed to see what comes next on Friday, June 29th. Roger was born April 3, 1952, the only child of Paul and Allene Burroughs of Marion. He was part of a large loving family with many aunts, uncles, and cousins, most notably Trevaline Cline, Rick Moss, Sue Arnold, and Darla Lowe. Roger thanks them for their companionship and love. Thanks to them, he was never lonely. Roger and his mother enjoyed a close bond and and they shared a wonderful sense of humor. Allene often referred to him as her “two-headed kid”. Roger was a multi-talented artist tho' he never saw it that way. Early on he drew and painted, being president of Marion High School Art Club two years running. Later on Roger picked up needle craft and became an accomplished counted cross-stitcher. The last several years of his life Roger created many dozens of socks he knit, personally fitted for special people in his life. He built two cardboard boats for the S.I.U. Cardboard Boat Regatta and won Vogue awards for both of his entries. Roger had many loves in his life but the top two were reading and music. An avid reader, Roger usually had at least three or four books going at a time. His love for music came to fruition when he taught himself to play upright bass. He played with many groups on occasion, Vern Henry and his Bluegrass Boys, Snake Lane Review, most recently Old 51, and anyone who would let him play with them. After a brief semester at John A Logan, Roger was employed by Maytag for what “started as a summer job” and lasted 32 years. He returned to John A to pursue a new career as a journalist. Sadly this dream never materialized even tho' Roger received John A's “Outstanding Journalist Award” for 2007-08. Roger was a man who enjoyed meeting new people. He believed you could never have too many friends. It was said that “he never talked badly about anyone—even those he did not like.” He will be missed. Roger is survived by his wife Cindy, daughter Chris (Jeff) Bryant; step-daughters Susan (Justin) Harbison, Amanda (Dwayne) Naas; grandchildren Brittany Bryant, Levi Bryant; and his father, Paul Burroughs. According to his wishes there will be a private celebration of life service at his home at a later date. For those who prefer, memorial contributions may be made to the “Hospice of Southern Illinois” and mailed in care of Wilson-McReynolds Funeral Home, 900 N. Court St., Marion, IL 62959. For additional information call the funeral home at 618-993-2131.

Roger Laverne Burroughs breathed his last and departed to see what comes next on Friday, June 29th. Roger was born April 3, 1952, the only child of Paul and Allene Burroughs of Marion. He was part of a large loving family with many aunts,... View Obituary & Service Information

The family of Roger Laverne Burroughs created this Life Tributes page to make it easy to share your memories.

Roger Laverne Burroughs breathed his last and departed to see...