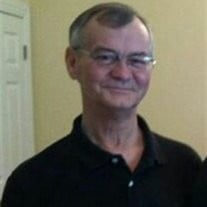 Roger L. Newlin, age 62, of Toledo OH and formerly of Marion, IL, passed away peacefully at 7:58 a.m. EST on Tuesday, October 8, 2013, in the Hospice of Northwest Ohio Center of Toledo, OH. He was born in Marion, IL on April 13, 1950, the son of Berl and Virginia (Emery) Newlin. Roger served and was honorably discharged from the United States Army. He was united in marriage to Betty Gabbard, in Lawton, OK and she passed away on February 3, 2009. He was retired after many years as a heavy equipment operator and was a member of the Operating Engineers Local #318 of Marion, IL. Roger enjoyed year round golfing that the indoor ranges of Ohio offered. Some of his other hobbies included recreational firearm target practice. He also spent much time on Lake Erie fishing with friends. His sons joined him on one such excursion; lots of great memories and tales remain. After retirement Roger took time to travel, some of the places included: Disney World with family, Germany and Hungary with a friend. He also checked off a bucket list item and went to Bristol, TN for a NASCAR race. He was an avid Earnhardt fan, Sr. and Jr.! He will be missed by all who knew and loved him. He is survived by companion, Nellie Byrne of Toledo, OH; two sons and daughters-in-law, (Michael) Todd and Sherrean Newlin and Aaron and Holly Newlin all of Marion, IL; granddaughter, Paige B. Newlin of Marion, IL; grandsons, Colton M. Newlin and Grant Newlin both of Marion, IL; the father who raised him, Jack Whitehead of Marion, IL; four sisters, Brenda Moake of Marion, IL, Sharon Blades of Energy, IL, Judy Newlin of Detroit, MI and Sharon Newlin of St. Louis, MO; two brothers and sister-in-law, Gary Powell and his wife, Karen of Marion, IL and Dennis Newlin of Johnston City, IL; aunt, Susie Emery of Marion, IL, a host of cousins, nieces, nephews, other extended family and many friends. He was preceded in death by his parents; infant son, Roger Matthew Newlin; brother, Jackie Dean Newlin; the mother of his children, Betty (Gabbard Newlin) Vail and brother-in-law, Kenneth Blades. Arrangements for Roger L. Newlin were entrusted to the Wilson-McReynolds Funeral Home, 900 N. Court Street, of Marion, IL. The time of visitation was from 10:00 a.m. until 1:00 p.m. on Tuesday, October 15, 2013, at Wilson-McReynolds Funeral Home in Marion. During the visitation, Roger’s grandson Colton played a medley of songs on the piano for family and friends. Following the time of visitation the graveside service and interment was at 1:15 p.m. with Rev. Kevin McNeely officiating in Rose Hill Cemetery of Marion, IL. Pallbearers were Gary Powell, Rustin Gamble, Justin Woods, David Gamble, Josh Blankenship, Shawn Bizaillion and Justin Wing. For those who preferred, memorial contributions were made to “Hospice of Southern Illinois”. Memorial contribution envelopes were available at the funeral home or were mailed in care of Wilson-McReynolds Funeral Home, P.O. Box 370, Marion, IL, 62959. For additional information please call the funeral home at 618-993-2131.

The family of Roger Lynn Newlin created this Life Tributes page to make it easy to share your memories.

Send flowers to the Newlin family.