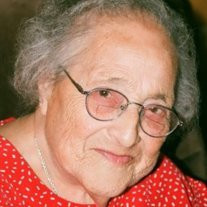 Rosalie Stubblefield, age 86, of West Frankfort, IL, formerly of Marion, IL, passed away peacefully at 10:00 a.m., on Sunday, January 5, 2014, in White Oaks Care Center in Mt. Vernon, IL. Rosalie was born on Tuesday, October 25, 1927, in Marion, IL, the daughter of Gaetano and Dorothy (Viso) Segretario. She grew up in Marion and graduated from Marion High School. Rosalie was united in marriage to Vernell “Vern” Stubblefield on Friday, November 28, 1947, in Piggott, AR and together they shared forty years of marriage until his death on February 28, 1988. Earlier in her working career she was employed by Sangamo and General Dynamics where she was shipping and receiving inspector, she enjoyed her work and retired in 2002, at age seventy-five. She was a member of St. Joseph Catholic Church of Marion, IL, and in recent years has been attending St. John’s Catholic Church of West Frankfort, IL. She liked to keep busy working and caring for her family and enjoyed cooking and baking for her family and she liked to go to yard sales and auctions. Her family was most important to her and always took interest in their many activities. Rosalie will be missed by all who knew and loved her and they will treasure the many memories that have been created. Survivors include her two daughters and son-in-law, Verna McNeil of Royalton, IL and Patricia A. “Patti” and Bill Tooley of West Frankfort, IL: four grandchildren, Chris McRoy of West Frankfort, IL, Amy McNeil and companion, Brad Daron of Carterville, IL, Vern Tooley of St. Charles, MO and Rebecca Tooley Schmidt and husband, Bill Schmidt of Cambria, IL; three great grandchildren, Madison, Quinton and Trace Daron all of Carterville, IL: two brothers, Joe Segretario of Paducah, KY and Donnie Segretario of Johnston City, IL; sister-in-law, Jean Sprietler of Coulterville, IL, other extended family and many friends. She was preceded in death by her parents; husband, Vern Stubblefield; five sisters, Bess Viverito, Elsie Howerton, Josephine Short, Frances Meneese and infant sister, Clara Rametta and two brothers, Paul and Andy Rametta. Arrangements for Rosalie Stubblefield were entrusted to Wilson-McReynolds Funeral Home, 900 N. Court St., Marion, IL. The funeral mass was at 11:00 a.m. on Saturday, January, 11, 2014, with Father Larry Lemay presiding at St. Joseph Catholic Church located at 600 North Russell Street in Marion, IL. The readings of the mass were presented by Jim Hopkins. The prelude and postlude musical selections were presented by organist, Valerie Oestry. Special vocal musical selections presented during the mass were “Ave Maria”, “Lord When You Come”, “How Great Thou Art” and “What So Ever You Do” all by cantor, Kay Levanti and accompanied by Valerie Oestry. Other musical selections of the mass were also presented. Entombment followed in Rose Hill Cemetery of Marion, IL. Pallbearers were Jason Beers, Brad Daron, Vern Tooley, Ethan Emmerson, Travis Edgeworth and Gary Segretario. After the committal service at the cemetery the family and friends gathered at Ryan’s Steak House in Marion, for a meal and continued time of fellowship and support. The time of visitation was from 5:00 p.m. until 7:00 p.m. on Friday, January 10, 2014, at Wilson-McReynolds Funeral Home of Marion, IL. The prayer service was conducted at 5:00 p.m. on Friday with Father Larry Lemay presiding. The prayer service began with the presentation of a special recorded vocal musical selection “The Far Side Banks of Jordan” by Johnny and June Carter Cash. During the time of visitation a “Reflection of Life” DVD Memorial Tribute featuring special people, places and events of Rosalie’s life was presented to the family and friends. The visitation resumed after 10:00 a.m. until the time of the service on Saturday morning at the church. For those who preferred, memorial contributions were made to “St. Joseph Catholic Church Building Fund” or “St. John the Baptist Catholic School”. Memorial contribution envelopes were available at the church and the funeral home or were mailed in care of Wilson-McReynolds Funeral Home, P.O. Box 370, Marion, IL, 62959. For additional information please contact the funeral home by calling 618-993-2131.

The family of Rosalie Stubblefield created this Life Tributes page to make it easy to share your memories.

Send flowers to the Stubblefield family.