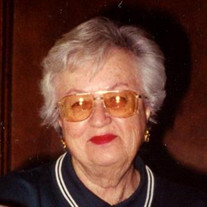 Rosemary Todroff, age 86, of Marion, IL, passed away peacefully at 11:58 p.m. on Sunday, March 25, 2018, in Carrier Mills Nursing and Rehabilitation Center of Carrier Mills, IL. She was born on Tuesday, October 20, 1931, in Harco, IL, the daughter of Frank and Julia (Yuhas) Kapas. Rosemary attended school in Harrisburg, IL and was a graduate of Harrisburg High School. She was united in marriage to John Paul Todroff on Wednesday, June 7, 1950, in Harrisburg, and together they shared over 53 years of marriage until his death on Wednesday, December 13, 2003. Rosemary never worked outside of her home but always kept busy seeing to the needs of her family and managing her home. She was of the Catholic faith and was a member of St. Joseph Catholic Church of Marion. Rosemary loved her family and enjoyed the many times they all would be together and cherished the memories created. The memories that were created will now be cherished by those she leaves behind. She is survived by her son, John Nicholas “Nick” Todroff of Marion; daughter and son-in-law, Julia Ann and Randy Mazzotti of Martinsburg, WV; five grandchildren, Megan Rebecca Todroff of Grand Junction, CO, Rachel Nichole Stapleton of Winchester, VA, Susan Leigh Hazel of Irmo, SC, Laura Anne Hazel of Indianapolis, IN, and Lacy J. Ford and her husband Andrew of Mt. Zion, IL; five great grandchildren, Simon Forest Brown of Grand Junction, CO, Tinlee Grace Ford, Landree Jane Ford and Maizee Ford all of Mt. Zion, IL and Aidan James McGauhey of Indianapolis, IN; sister, Francis Leitner of Cleveland, TN; son-in-law, Lonnie Ray Hazel and his wife Catherine of Beech Grove, IN; sister-in-law, Mary Lou Noelle of Evansville, IN, other extended family, and many friends. She was preceded in death by her parents, husband, and daughter, Christine Hazel in November of 2002. Arrangements were entrusted to Wilson-McReynolds Funeral Home, 900 N. Court St., Marion. The visitation was from 5:00 p.m. until 7:00 p.m. on Tuesday, March 27th at the funeral home. The funeral mass was at 3:00 p.m. on Wednesday, March 28, 2018, at St. Mary’s Catholic Church, located at 2000 West Poplar St. in Harrisburg, with Father Abraham Adejoh presiding. The music of the mass was presented by organist Melinda Tolly. Interment followed next her husband in Sunset Lawn Cemetery of Harrisburg. Pallbearers were John “Nick” Todroff”, Randy Mazzotti, Lonnie Hazel, Andrew Ford, Megan Todroff, Susan Hazel and Laura Hazel. For those who preferred, memorial contributions were made to “Hospice of Southern Illinois” and mailed in care of Wilson-McReynolds Funeral Home, 900 N. Court St. Marion, IL 62959. Memorial envelopes were available at the funeral home and the church. For additional information please call the funeral home at 618-993-2131.

Rosemary Todroff, age 86, of Marion, IL, passed away peacefully at 11:58 p.m. on Sunday, March 25, 2018, in Carrier Mills Nursing and Rehabilitation Center of Carrier Mills, IL. She was born on Tuesday, October 20, 1931, in Harco, IL, the daughter... View Obituary & Service Information

The family of Rosemary Todroff created this Life Tributes page to make it easy to share your memories.

Send flowers to the Todroff family.