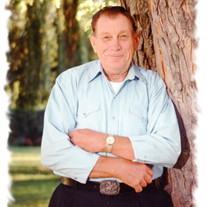 Roy Wayne Morgan, age 84, of Crest Hill, IL and formerly of Marion, IL and Williamson County passed away at 6:58 p.m., Wednesday, October 4, 2017 at Presence St. Joseph Medical Center in Joliet, IL. He was born on Monday, February 20, 1933, in Williamson County, IL the son of Ruban and Missouri M. (Deer) Morgan. Roy grew up in the Marion area of Williamson County, and graduated from Marion High School Class of 1951. He served in the United States Army for two years during the Korean War, and was Honorably discharged in April of 1955. Roy worked as a Iron Worker and is a member of Local #393 in Aurora, IL. He retired in 1992. He loved working and spending time outdoors enjoying gardening, fishing and watching car racing as well. He is survived by two daughters, Denise Wheelock of Blackduck, MN, Beverly Morgan of Joliet, and one son, Charles Morgan of Herrin, IL. He is also survived by two sisters and a brother, Loretta (Frank) Crosson of Marion, Devona (Kenneth) Bloodworth of Sebree, KY, and Amel (Diane) Morgan of Lemont, Ill. along with several nieces and nephews, other extended family members, and many friends. He was preceded in death by his parents and infant brother Delmar Ray Morgan. Arrangements for Roy Wayne Morgan have been entrusted to Wilson-McReynolds Funeral Home, 900 N. Court St. of Marion. The visitation was from 10:00 a.m. until 11:30 a.m. on Tuesday, October 10, 2017 at the Wilson-McReynolds Funeral Home in Marion. During the time of visitation a “Reflection of Life” DVD Memorial Tribute featuring special people, places and events in Roy’s life was presented to the family and friends. The funeral service followed at 11:30 a.m., with Rev. Joe Kozar presiding. Special musical selections presented during the service were, “Old Rugged Cross” and “Precious Lord” both by Jane Crosson and Diana Kozar. Special Congregational musical selection was ‘Amazing Grace”. Special comments of memory were presented by Roy’s children, Charles, Bev and Denise. Interment followed in the East Liberty Cemetery southwest of Marion, IL. Pallbearers were Charles Morgan, Scott Crosson, Mike Bloodworth, Tim Bloodworth, Tom Skinner and Richard Morgan. Special musical selection presented at the graveside was “I’ll Fly Away” by Scott Crosson, Jane Crosson, and Diana Kozar. For those who preferred, memorial contributions were made to, “Korean War Veterans Memorial”, and mailed in care of Wilson-McReynolds Funeral Home, 900 N. Court Street, Marion, IL 62959. Memorial envelopes were available at the funeral home. For additional information call the funeral home at 618-993-2131.

The family of Roy Wayne Morgan created this Life Tributes page to make it easy to share your memories.

Send flowers to the Morgan family.