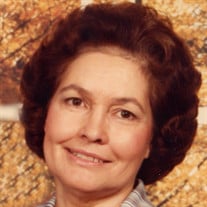 Ruth Whitehead, age 89, of Marion, IL passed away peacefully with her family by her side at 4:06 P.M. on Saturday, October 25, 2014, at home. She was born at home in Williamson County, IL, May 6, 1925, the daughter of Charlie and Alice A. (Adelsburger) Murphy. She was united in marriage to William Wayne Whitehead on July 7, 1945, in Marion, IL and together they shared nearly fifty-four years of marriage until his death on March 4, 1999. She was a member of the Parish Park Baptist Church of Marion, IL. Ruth always kept busy caring for her family and her home and enjoyed cooking “big meals”. She also found pleasure in raising flowers, reciting poetry, and sharing her many treasured stories. Ruth truly loved family gatherings and the holidays they shared together. She is survived by her three daughters, Rotha Bahr and husband, Robert of Carbondale, IL; Linda Marcum Ruhe and husband, Carl of Marion, IL and Rebecca Rowe and husband, Kevin of Lake St. Louis, MO; her two sons, Wayne Whitehead and wife, Linda of West Lafayette, IN and Dr. Mark Whitehead and wife, Candace of Marion, IL; eleven grandchildren, Angela Hester and husband, Scott; Melanie Porter and husband, Robby; Rob Bahr and wife, Leah; Rachel Bahr and husband, Peter Shaw; Jennifer Marcum; Daniel Marcum; Laura Rowe and husband, Andrew Schmuck; Sarah Whitehead; Jacob Whitehead; Christopher Whitehead and Kyle Whitehead; eight great-grandchildren; one brother, Joe and wife, Georgia Murphy of Harrisburg, IL, other extended family and many friends. She was preceded in death by her parents; husband, Wayne Whitehead; two sisters, Edna Mills and Mildred Bryant; one brother, Charles Murphy and son-in-law, Dan Marcum. Arrangements for Ruth Whitehead were entrusted to the Wilson-McReynolds Funeral Home, 900 N. Court Street, of Marion, IL. The time of visitation was from 10:00 a.m. until 1:00 p.m. on Saturday, November 1, 2014 at the funeral home. The funeral service was at 1:00 p.m. on Saturday, November 1, 2014, at Wilson-McReynolds Funeral Home with Rev. John Holst presiding. Ruth’s brother Joe Murphy read a special poem “Tomorrow” and presented comments of memory. The prelude and postlude musical selections were presented by pianist Becky King. Special musical selections presented during the service were “How Great Thou Art” as a congregational hymn, special vocal musical selections presented were “Because He Lives” & “Precious Memories” by David Thompson accompanied by pianist Becky King. Interment followed next to her husband in Webb Cemetery of Tunnel Hill, IL. Pallbearers were Bob Bahr, Carl Ruhe, Chris Whitehead, Jacob Whitehead, Kevin Rowe, Rob Bahr, Kyle Whitehead and Joe Murphy. Following the committal service at the cemetery the family and friends gathered at Zion United Church of Christ in Marion for a meal and continued time of fellowship and support. For those who preferred, memorial contributions were made to “Hospice of Southern Illinois” or “Marion Rotary Wayne Whitehead Scholarship”. Memorial contribution envelopes were available at the funeral home or may be mailed in care of Wilson-McReynolds Funeral Home, P.O. Box 370, Marion, IL, 62959. For additional information please call the funeral home at 618-993-2131.

Ruth Whitehead, age 89, of Marion, IL passed away peacefully with her family by her side at 4:06 P.M. on Saturday, October 25, 2014, at home. She was born at home in Williamson County, IL, May 6, 1925, the daughter of Charlie and Alice A. (Adelsburger)... View Obituary & Service Information

The family of Ruth Whitehead created this Life Tributes page to make it easy to share your memories.

Send flowers to the Whitehead family.