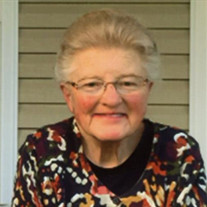 Sally Ann Garrett, age 67, of Marion, IL, passed away peacefully with her family by her side at 4:00 pm. on Thursday, July 18, 2019, in Memorial Hospital of Carbondale, IL. She was born on Monday, March 10, 1952, in Carbondale, IL, the daughter of Elwood and Helen (McCollum) Smith. Sally attended school in Marion and was a graduate of Marion High School Class of 1971. She was united in marriage in First Baptist Church of Marion, to Tommie Lee Garrett on Saturday, May, 5, 1979, and together they have shared over 40 years of marriage. Sally was of the Pentecostal faith and attended at Trinity Pentecostal Tabernacle of Jonesboro, IL. She loved the LORD and enjoyed her church and being with her church family. Sally was always thinking of others and helping when she saw a need. She tried living her life as a Christ like example to others. In her spare time earlier in her life she enjoyed bowling and taking photos. Sally loved managing her home and seeing to the needs of her family. She was always interested in all of their many activities, especially those of her grandchildren. She looked forward to the many times they all would gather and be together. The many memories that have been created will now be cherished by those she leaves behind. She is survived by her husband Tommie L. Garrett of Marion; son and daughter-in-law, Andrew S. and Rachel Garrett of Marion; four grandchildren, Drew, Lily, Libbie and Drake Garrett all of Marion; step granddaughter, Destanie Garrett of St. Louis, MO; brother and sister-in-law, Tom and Veronica Smith of Boonville, IN, several nieces and nephews, other extended family members and many friends. She was preceded in death by her parents. Arrangements were entrusted to Wilson-McReynolds Funeral Home, 900 N. Court St., Marion. The visitation was from 10:00 a.m. until 1:00 p.m. on Tuesday, July 23, 2019, at the funeral home. During the time of visitation a “Reflection of Life” DVD Memorial Tribute featuring special people, places and events in Sally’s life was presented to the family and friends. Following the time of visitation the funeral service was at 1:00 p.m. with Pastor Geoff Bond and Rev. Timothy Schlag presiding. The prelude and postlude musical selections were presented by pianist Glenda Bond. Special vocal musical selections presented during the service were “Oh I Want to See Him” as a congregational hymn accompanied by pianist Glenda Bond and “Build My Mansion-Next Door to Jesus” and “What a Day That Will Be” both by Jane Ann Schlag, Jamie Helton and Glenda Bond with Glenda accompanying on the piano. Interment followed in Maplewood Cemetery of Marion. Pallbearers were Andrew Garrett, Drew Garrett, Jake Mattingly, Ryan Helton, Luke Helton and Cale Mattingly. Also serving as honorary pallbearer was Drake Garrett. At the graveside the musical selection “Amazing Grace” was presented as a congregational hymn. Following the committal service at the cemetery the family and friends gathered at New Beginnings Church Fellowship Hall in Marion, for a meal and continued time of fellowship and support For those who preferred, memorial contributions were made to “St. Jude Children’s Research Hospital” and mailed in care of Wilson-McReynolds Funeral Home, 900 N. Court Street, Marion, IL 62959. Memorial envelopes were available at the funeral home. For additional information please call the funeral home at 618-993-2131.

The family of Sally Ann Garrett created this Life Tributes page to make it easy to share your memories.

Send flowers to the Garrett family.