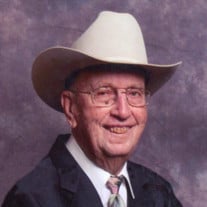 Samuel Ray Jones, age 103, of Marion, IL, passed away peacefully at 10:41 a.m. on Monday, October 1, 2018, in the Sunshine Gardens Senior Living Center of Marion. He was born on Thursday, June 10, 1915, at home on the family farm located west of Goreville, IL, the son of Thomas A. and Ida Mae (Brooks) Jones. Sam was united in marriage to Eva Lee Goley on Sunday, September 27, 1936, in Charleston, MO and together they shared over 81 years of marriage until her death on Friday, December 29, 2017. Sam’s working career was with CIPS, now called Ameren, for many years as a power meter man until he retired in 1977 at the age of 62.After his retirement he managed and operated their Registered Polled Hereford Cattle Farm south of Marion. He was a long time member of First Baptist Church of Marion and the Williamson County Farm Bureau. In 1993, the Jones Farm was honored as the “Farm Family of the Year” by the Farm Bureau. Sam and his wife Eva will be remembered for their matching bright colored clothing when they went out dancing even up into their 90’s. Both he and Eva traveled all over the country showing their Registered Polled Hereford Cattle and have made many friends over the years. In his spare time Sam enjoyed golfing. His church and family were a very important part of his life. He was always interested in all of the family activities and enjoyed the many times they all would gather together at the farm. The many memories that have been created will now be cherished by those he leaves behind. He is survived by his son, Sammie Lee Jones of Weatherford, TX; three grandchildren, Sammie Ray Jones and his wife Patti of Carbondale, IL, Timmie Lee Jones of Honolulu, HI, and Jeanna Lynn Honicutt of Panama City, FL , six great grandchildren, daughter-in-law, Connie Jones of Bluffton, IN, other extended family and many friends. He was preceded in death by his parents; wife; son, Garry Jones; grandson, Cory Ray Jones; sister, Ruth and two brothers, Raymond and Clyde Jones. Arrangements for Samuel Ray Jones were entrusted to Wilson-McReynolds Funeral Home, 900 North Court Street, Marion, IL 62959. The visitation was 11:00 a.m. until 1:00 p.m. on Saturday, October 6, 2018 at the funeral home. During the visitation a “Reflection of Life” DVD Memorial Tribute was presented to the family and friends and featured special people, places, and events of Sam’s life. Following the time of visitation the funeral service was at 1:00 p.m. with Dr. Bob Dickerson presiding. The prelude and postlude musical selections were by pianist, Lori Creamer. Special vocal musical selections presented during the service were “How Great Thou Art” and “Amazing Grace” both by Lori Creamer who accompanied herself on the piano. Special recorded vocal musical selection presented during the service was “One Day at a Time” by Cristy Lane. Interment followed next to his wife in Freedom Cemetery south of Marion. Those serving as pallbearers were Paul Pritchett, Jr., Joe Ollis, Rudolph Boester, John Boester, Jerald Jone, and Andy Huff. Following the graveside committal service at the cemetery family and friends gathered at the First Baptist Church for a meal and continued time of fellowship and support. For those who preferred, memorial contributions were made to either or both; “First Baptist Church Memorial Fund” and “Hospice of Southern Illinois” and mailed in care of Wilson-McReynolds Funeral Home, 900 North Court Street, Marion, IL 62959. Memorial envelopes were available at the funeral home. For additional information call the funeral home at 618-993-2131.

Samuel Ray Jones, age 103, of Marion, IL, passed away peacefully at 10:41 a.m. on Monday, October 1, 2018, in the Sunshine Gardens Senior Living Center of Marion. He was born on Thursday, June 10, 1915, at home on the family farm located west... View Obituary & Service Information

The family of Samuel Ray Jones created this Life Tributes page to make it easy to share your memories.