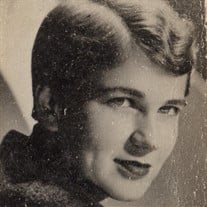 Sandra U. Skora, age 81, of Marion, IL, formerly of Wisconsin, passed away peacefully at 5:31 a.m. on Friday, June 17, 2016 in Heartland Regional Medical Center in Marion, IL. She was born on Wednesday, March 27, 1935, in Olney, IL, the daughter of Robert William and Lois R. (Rutger) Ullom. She was united in marriage to Robert F. Skora on Saturday, August 22, 1959, in Chicago, IL and together they have shared over fifty-six years of marriage. Sandy received a degree in Occupational Therapy and was a Registered Occupational Therapist for many years, she later worked in a grocery store and a bakery in Appleton, WI. After the couple’s retirement and for the last eight years Marion has been their home. Sandy and Robert attended Congregation Adat Ariel Messianic Community in Marion. She was always busy caring for her home and family and always enjoyed the times they shared together. She is survived by her husband, Robert F. Skora of Marion; son and daughter-in-law, Bill and Cindy Skora of Courtland, VA; granddaughter, Melissa Francis of Norfolk, VA; brother and sister-in-law, Thomas and Patricia Ullom of Fish Creek, WI, other extended family members and many friends. She was preceded in death by her parents and her son, Kenneth Richard Skora on April 8, 2016. Arrangements for Sandra U. Skora were entrusted to Wilson-McReynolds Funeral Home, 900 N. Court St., Marion, IL. The visitation was from 3:00 p.m. until 4:00 p.m. on Wednesday, June 22, 2016, at the funeral home. Following the time of visitation the memorial service was at 4:00 p.m. with Rabbi Moshe Laurie presiding. After the service the family and friends gathered at Bennie's Restaurant in Marion, for a meal and continued time of fellowship and support. For additional information please contact the funeral home by calling 618-993-2131.

The family of Sandra U. Skora created this Life Tributes page to make it easy to share your memories.

Send flowers to the Skora family.