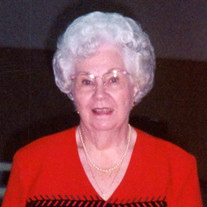 Sarah Ellen Bethel, age 90, of Marion, IL passed away peacefully surrounded by her family at 1:40 p.m. on Monday, September 10, 2018, at Parkway Manor of Marion. She was born on November 26, 1927, in Union County, New Mexico the 7th of 9 children... View Obituary & Service Information

The family of Sarah Ellen Bethel created this Life Tributes page to make it easy to share your memories.

Send flowers to the Bethel family.