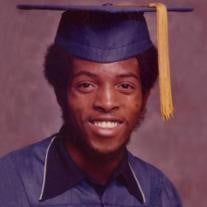 Scott A. Berry, Sr., age 55, of Marion, IL, passed away surrounded by his family at 12:04 a.m., on Sunday, May 13, 2012, at his home. He was born in Camden, AR on Friday, December 21, 1956, the son of Henry Berry, Sr. and Gevordia (Gordan) Berry. Scott attended school in Sparkman, AR and was a graduate of Sparkman High School in 1976. He was united in marriage to Mary D. Huddson on, March 31, 1990, in Marion, IL and together they have shared 22 years of marriage. Scott’s working career was with Maytag of Herrin, IL, on the assembly line for 18 years until the plants closure several years ago. Earlier in his lifetime he worked for several years with Pattin Bolts and Roofing of Marion, IL. He was a Christian and was of the Protestant faith. In his spare time he enjoyed fishing, playing basketball, gardening and spending time outdoors. Though he always kept busy, his family was the most important part of his life, always being interested in their many activities and enjoying the many times they gathered together. The many memories that were created will now be cherished by those he leaves behind. He is survived by his wife, Mary D. Berry of Marion, IL; mother, Gevordia Thrower of Bearden, AR, three sons and daughter-in-law, Dennis Juniel-Berry and his wife, Brenda of Bearden, AR, Tony Blevins of Sparkman, AR and Scott Berry, Jr. of Marion, IL; two daughters and son-in-law, Jennifer and Ian Jennings of Marion, IL and Taywonna Justice of Marion, IL, seven grandchildren, one great grandson;two sisters and brother-in-law, Pearlie Mae and Ellis Reed of Bearden, AR and Pearlene Cannedy of Milwaukee, WI; four brothers and three sisters-in-law, Richard and Betty Berry of Bearden, AR, Hill and Yvonne Berry of Bearden, AR, Isaac and Ann Berry of Camden, AR and Douglas Berry of Tulsa, OK, other extended family and many friends. He was preceded in death by his father; step son, Patrick Buchanan and four brothers, Cisro Berry, Henry Berry, Jr., Amos Berry and George Berry. Arrangements for Scott A. Berry, Sr. were entrusted to the Wilson-McReynolds Funeral Home, 900 N. Court Street, Marion, IL. The time of visitation was on Thursday, May 17, 2012, between the hours of 5:00 p.m. and 7:00 p.m. at the funeral home. During the time of visitation a “Reflection of Life” DVD Memorial Tribute featuring special people, places and events in Scott’s life was presented to the family and friends. Following the time of visitation the memorial service was at 7:00 p.m. with Scott’s son, Deacon Dennis Juniel-Berry presiding. Comments of memory were presented by Scott’s daughter, Jennifer; daughter-in-law, Brenda Juniel-Berry; sister, Pearlene Cannedy; niece, Janice Owens; friend, Andrea Marshall and sister-in-law, Bobbie Jean Berry. The prelude and postlude musical selections were recorded piano selections. Special recorded vocal selections presented during the service were “Just A Closer Walk With Thee” by Charley Pride; “I’ll Fly Away” by Vern Gosdin and “Amazing Grace” by Elvis Presley. The family asked that in lieu of flowers, memorial contributions be made to the “The Family of Scott A. Berry, Sr.”, to help with the costs of final expenses. Memorial contribution envelopes were available at the funeral home or were mailed in care of Wilson-McReynolds Funeral Home, P.O. Box 370, Marion, IL 62959. For additional information please call the funeral home at 618-993-2131.

The family of Scott A. Berry Sr. created this Life Tributes page to make it easy to share your memories.

Send flowers to the Berry family.