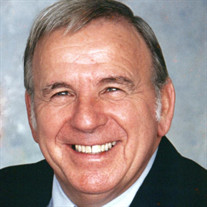 Sherlock Holmes, 93, passed peacefully from this life on September 29, 2020, at the home of his daughters, Kathy Phillips and April Leigh, in Vestavia, AL. Sherlock was a longtime resident of Marion, IL. Sherlock was born May 20, 1927, in Marion, IL, to Henry and Bess (Webb) Holmes. When he was 5 years old, his mother passed away. Sherlock and his twin sister, Shirley, were raised by their aunt, Flodene Davenport, and her husband, Jack. He attended school in Marion and Chicago and graduated from Marion High School in 1945. He answered the call of this nation during World War II, enlisting in the Navy when he turned 18. After his period of faithful service, he was honorably discharged with the rank of Seaman First Class. Upon returning home, Sherlock learned the trade of bricklaying, which would provide the foundation for his later work as builder and contractor. In 1948, Sherlock married Elinor Burnett and they were blessed with three children, Kathy, David and April. During the 1950s and 1960s, he shifted his career focus into insurance sales. He worked with Prudential Insurance for a number of years. In the mid-60s, Sherlock and Elinor divorced. By 1971, life was about to change for Sherlock. He met Joan (Zoeller) Hunter. He rediscovered his faith, committed his life to Christ and began a new life’s journey. On March 5, 1971, Sherlock and Joan were married. And he was further blessed with a stepdaughter, Vickie. With Joan by his side, Sherlock founded Sherlock Holmes Mobile Homes. His natural sales skills and experience in contracting were critical to ensuring the success of this venture. In the years that followed, as the business prospered and the family grew, Sherlock and Joan purchased an RV and traveled extensively, enjoying good times spent with grandchildren. In 1992, Joan suffered a debilitating stroke. Sherlock devotedly cared for her until her death in 2005. During all this time, Sherlock continued to build homes and pursue various small business ventures. Sherlock always took a special pride in his name and welcomed every opportunity to introduce himself as the “real Sherlock Holmes”. He was a longtime member of the Community of Faith Church in Marion, and later a member of Christian Covenant Fellowship Church in Carterville, IL. He touched many lives through his involvement in the church and in his business life. Sherlock will be remembered for his friendly outgoing personality, his ready smile, his loving heart, his lifelong friendships and his dedication to the Lord. His children and grandchildren will attest that he was greatly loved and truly one of a kind. He will be forever in our hearts. Sherlock is survived by daughter and husband, Kathy and Ralph Phillips of Vestavia, AL; son and wife, David and Connie Holmes of Gilbert, AZ; daughter, April Leigh of Vestavia, AL; stepdaughter, Vickie Hunter of Marion, IL; grandchildren, Trevor O’Connor, Ryan O’Connor, Cari (Todd) Woods, Cassi Hunyady, Hillary (Aaron) Enloe, Holly (Random) Neal, Heather (Billy) Stepter, Bradley (Maida) Phillips, great grandchildren; nephew, Jan Monroe; niece, Mary Ann Monroe, other extended family and many friends. He was preceded in death by his parents; wife, Joan; twin sister, Shirley Monroe; and his aunt and uncle, Flodene and Jack Davenport. Arrangements have been entrusted to Wilson-McReynolds Funeral Home, 900 N. Court St., Marion. A Celebration of Life Service will be held for him on Saturday, July 10, 2021, at Wilson-McReynolds Funeral Home, 900 North Court Street, Marion, IL. Visitation will begin at 9:00 a.m. and the service will follow at 10:30 a.m., with Pastor Todd Greiner officiating. Interment will be in Rose Hill Cemetery. The family requests for those who prefer, memorial contributions be given to “Alzheimer’s Association”. Memorial contributions may be mailed in care of Wilson-McReynolds Funeral Home, 900 N. Court Street, Marion, IL, 62959. Memorial envelopes will be available at the funeral home. For additional information call the funeral home at 618-993-2131.

Sherlock Holmes, 93, passed peacefully from this life on September 29, 2020, at the home of his daughters, Kathy Phillips and April Leigh, in Vestavia, AL. Sherlock was a longtime resident of Marion, IL. Sherlock was born May 20, 1927, in... View Obituary & Service Information

The family of Sherlock Holmes created this Life Tributes page to make it easy to share your memories.

Sherlock Holmes, 93, passed peacefully from this life on September...