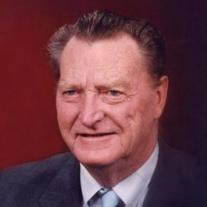 Shirley Taylor Midgett, age 78, of rural Marion, IL passed away peacefully surrounded by his family at 7:55 a.m. on Sunday, July, 29, 2012, at his home. He was born in Creal Springs, IL on Friday, October 19, 1933, the son of William Paul and Geneva Alberta (O’Neal) Midgett. Shirley answered the call of this nation by serving in the United States Army during the time of the Korean War. He was stationed for sixteen months in Korea and after his period of faithful service was honorably discharged on April 25, 1955. He was united in marriage to Lula Faye Jones on Friday, September 27, 1957, in Creal Springs, IL and together they have shared nearly fifty-five years of marriage. He is a member of the McKinney Chapel Freewill Baptist Church, of the Lake of Egypt area, south of Marion, IL and also the American Legion Post No. 147 of Marion, IL. Shirley's working career was with Marion Pepsi Cola of Marion, IL for twenty-five years and two months, until his retirement on October 23, 1998. While with Pepsi Cola he worked loading route trucks and vans, on the production line and last worked repairing the vending coin mix machines. In his earlier years he enjoyed hunting and fishing. He always kept busy and when time allowed he loved working in his garden and yard. Shirley loved his family, especially his grandchildren and his many friends and will be missed by all who know and loved him. He is survived by his wife, Lula F. Midgett of Marion, IL; daughter and son-in-law, Darlene and William G. “Billy” Seeger of Marion, IL; three sons and daughters-in-law, Clarence Midgett and friend, Marlene Nash of Dupo, IL, James Paul and Andrea Midgett of Marion, IL and Mickey Gene and June Midgett of St. James, MO; stepson and his wife, Jackie Dale and Kathy Frey of Marion, IL; nine grandchildren, William Chad Seeger, Ashley Faye Seeger, C. W. Allen, Brookellen Kay Midgett, Paul Michael Midgett, Serena Kathryn Midgett, Joshua Taylor Midgett, Jared Frey, and Nickolas Dale Frey; two great-grandchildren, Joshia Midgett and Jazmalyn Midgett; one brother and sister-in-law, Vernell and Lenawee Midgett of Las Vegas, NV, other extended family and many friends. He was preceded in death by his parents; one half sister, Geneva Bloodworth and one half brother, Wayman Deon Midgett. Arrangements for Shirley Taylor Midgett were entrusted to the Wilson-McReynolds Funeral Home, 900 N. Court Street, Marion, IL. A time of visitation for family and friends was on Tuesday, July 31st, from 5:00 p.m. until 8:00 p.m. at the funeral home. During the time of visitation a “Reflection of Life” DVD Memorial Tribute featuring special people, places and events of Shirley’s life was presented to the family and friends. The funeral service was at 11:00 a.m. on Wednesday, August 1, 2012, at Wilson-McReynolds Funeral Home with Rev. Kenneth Blumenstock presiding. The prelude and postlude musical selections were recorded piano selections. Special recorded vocal musical selections presented during the service were “How Great Thou Art” by Elvis Presley, “I Saw the Light” by Hank Williams and “Today We Call It Heaven, Tomorrow We’ll Call It Home” by M. Childers and J. Campbell. Interment followed in McKinney Chapel Cemetery of the Lake of Egypt area, south of Marion, IL. Pallbearers were Dale Frey, Clarence Midgett, Paul Midgett, Micky Midgett, Billy Seeger, Josh Midgett and Michael Midgett. Military honors were accorded at the graveside by members of the V.F.W. Heyde-Pillow Post No. 1301, American Legion Post No. 147 and the Illinois National Guard Flag Detail, all of Marion, IL. Those participating were Commander, Dan Fruge, Chaplain, Nate Hopkins, Officer of the Day, Larry Largent; Bugler, Brian Samuel; National Colors, Ernie Rinella; V.F.W. Colors, Bill Hatfield; Color Guard, Ralph DeVasier and Jessie James and Firing Squad, Don Burgrabe, Ron Ganzer, Bill Hampsey, Fred Read, Ron Russell, Bill Stewart and Dale “Squeak” Wilson. Members of the Illinois National Guard participating in the folding of the flag were PVT Mario Medina and PFC Derek Clark. Presentation of the folded flag to Shirley’s wife, Lula was by PVT Mario Medina. After the committal service at the cemetery, the family and friends gathered at the First Baptist Church of Creal Springs for a meal and continued time of fellowship. For those who preferred, memorial contributions were made to “Hospice of Southern Illinois”. Memorial contribution envelopes were available at the funeral home or were mailed in care of Wilson-McReynolds Funeral Home, P.O. Box 370, Marion, IL 62959. For additional information please contact the funeral home by calling 1-618-993-2131.

The family of Shirley Taylor Midgett created this Life Tributes page to make it easy to share your memories.

Send flowers to the Midgett family.