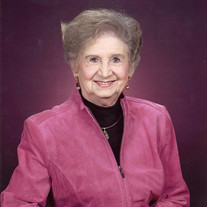 Shirley Odum, age 85, of Marion, IL, passed away peacefully at 1:47 a.m. on Thursday, March 7, 2019, in Herrin Hospital of Herrin, IL. She was born at home on Saturday, June 10, 1933, west of Marion in Williamson County, IL, the daughter of Claude and Ruth (Durham) King. Shirley was united in marriage to Wayne L. Odum on Saturday, December 24, 1949, in Marion and together they shared nearly 52 years of marriage until his death on Wednesday, July 25, 2001. She was a homemaker and spent much of her time managing her home and seeing to the needs of her husband, three sons and other family. Shirley was an active member of the Second Baptist Church of Marion and also the Winsome Ladies Sunday School Class. In her spare time when she was younger, her and her family loved camping in their 34-foot Airstream Camping Trailer. They have traveled as a family and camped over much of the United States. Later in their lifetime she and Wayne became snowbirds traveling to Florida to camp. She also enjoyed playing pinochle and visiting with her many friends. Shirley always kept busy but one of the most important parts of her life was her family. She was always interested in all of their many activities, especially those of her grandchildren and great grandchildren. The many memories that have been created will now be cherished by those she leaves behind. She is survived by three sons and daughters-in-law, Terry L. and Debbie Odum, Gary L. and Paula Odum and Jerry D. and Mary Jo Odum all of Marion; six grandchildren, Amber Hall and her husband Ryan of Marion, Shawn Odum and his wife Becca of Jackson, TN, Zach Odum and his wife Lisa of Marion, Justin Odum and his wife Lindy of O’Fallon, IL, Josh Odum and his wife Casey of Marion and Hunter Odum of Marion; four great grandchildren, Jacob Hall, Molly Odum and Walker Odum all of Marion and Baby Odum who is expected in August 2019; brother and sister-in-law, J.B. and Mary King of Marion; sister-in-law, Ardis McCutcheon of Scottsdale, AZ, other extended family and many friends. She was preceded in death by her parents, husband; three brothers, Arlie, Leon and Lavern King and sister, Wanda Mae Atnip. Arrangements have been entrusted to Wilson-McReynolds Funeral Home, 900 N. Court St., Marion. The graveside committal service will be at 1:00 p.m. on Sunday, March 10, 2019, in Rose Hill Cemetery of Marion, with Rev. Ashby Tillery presiding. Those wishing to attend the committal service should gather at the cemetery prior to 1:00 p.m. For those who prefer memorial contributions may be made to “Second Baptist Church Building Fund” and mailed in care of Wilson-McReynolds Funeral Home, 900 N. Court Street, Marion, IL 62959. Memorial envelopes will be available at the cemetery and funeral home. For more information call the funeral home at 618-993-2131.

The family of Shirley Rose Odum created this Life Tributes page to make it easy to share your memories.

Shirley Odum, age 85, of Marion, IL, passed away peacefully at...

Send flowers to the Odum family.